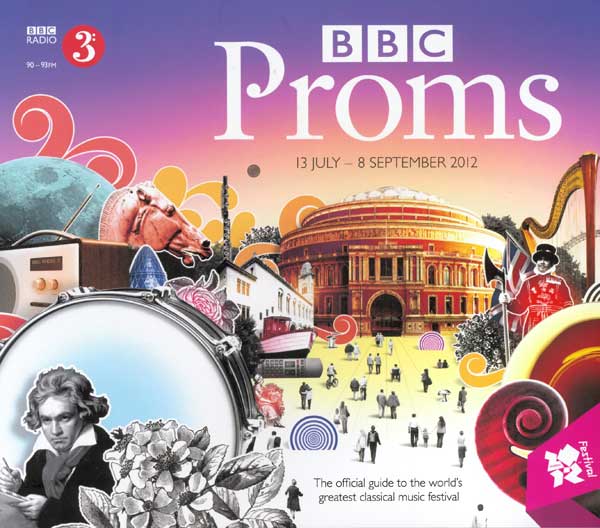 Now here’s a funny thing. Last year the BBC Proms website had an excellent guide to the new music that was to appear during the season. This year we have all manner of categories, including ‘Classical for starters’, ‘For families’, ‘World music and jazz’ and even ‘For poets’, but nothing to show concerts featuring living composers. Your best bet for finding new music is to take a look at their listing of all composers, following the links to the concert in which their music appears. Alternatively, here’s my own quick summary and a few picks.

The 2011 season featured a great deal of music by Frenchmen, especially by one of my favourite composers, Henri Dutilleux. Given the theme, however, it was surprising to see no Pierre Boulez on offer, which caused me to half-seriously wonder whether it was because Dutilleux and Boulez have a history of not getting on. This year, quelle surprise, there is plenty of Boulez but no Dutilleux. Four of these concerts – on 20th, 21st, 23rd and 24th July – take place under the baton of Daniel Barenboim with the West-Eastern Divan Orchestra. The works, Derive 2, Dialogue de l’ombre double, Mémoriale (‘…explosante-fixe..’ Originel), Messagesquisse and Anthèmes 2 all appear between a complete survey of Beethoven symphonies (except for No. 9, which appears in a separate concert). There is also a chance to hear Boulez conduct members of the West-Eastern Divan Orchestra on 26th July in his iconic Le marteau sans maître, this time paired with Beethoven’s Piano Quintet in E flat major.

I’ve counted a healthy 11 world, 3 UK and 3 London premières this year. Heading the first category is James Macmillan’s new work Credo, performed by three Proms-debuting choirs accompanied by BBC Philharmonic under the baton of Juanjo Mena on 7th August. Also a big name, Mark-Anthony Turnage’s short Canon Fever receives its world première with the BBCSO on the First Night (13th July). Both these concerts will be broadcast on BBC television. Simon Bainbridge’s The Garden of Earthly Delights, receives its first outing in the afternoon of 18th August with Birmingham Contemporary Music Group. That concert also features the music of Alexander Goehr and Oliver Knussen. Also standing out for me was the première of Helen Grime’s Night Songs, with BBC National Orchestra of Wales, this time with Knussen holding the baton. I interviewed Helen Grime, an up-and-coming composer well worth checking out, for CT a few months ago. Other brand new works this year are: Fung Lam’s Endless Forms on 18th July; Julian Philips’ Sorowfull Songes on 23rd July; Benedict Mason’s meld on 28th July; Elaine Agnew’s Dark Hedges on Saturday 4th August; Thea Musgrave’s Loch Ness – a Postcard from Scotland on 5th August; Brian Elias’s Electra Mourns on 11th August; Gavin Higgins’ Der Aufstand  and Gavin Bryars’ After the Underworlds on 12th August; and Eric Whitacre’s Higher, Faster, Stronger and Imogen Heap’sThe Listening Chair on 29th August.

One purely personal pick to finish. The late-night concert on 14th August contains a clutch of marvellous pieces. Whilst I don’t know Xenakis’s Phlegra or Andriessen’s De snelheid, there is a not-to-be missed chance to hear (preferably to see as well) Ligeti’s Poèmes symphonique for 100 metronomes, a work that, in both its elegant simplicity and frightening complexity, rather sums up the composer’s thinking at the time. Jonathan Harvey’s Mortuous Plango, Vivos Voco is now something of a modern classic. Written for eight track tape and using the sound of Winchester Cathedral’s tenor bell and the treble voice of the composer’s son (who, at the time, was a chorister there), it is a work of ravishing beauty. Finally, there is the chance to ‘hear’ Cage’s always-provocative piece of non-music (or is it?), 4’33”.