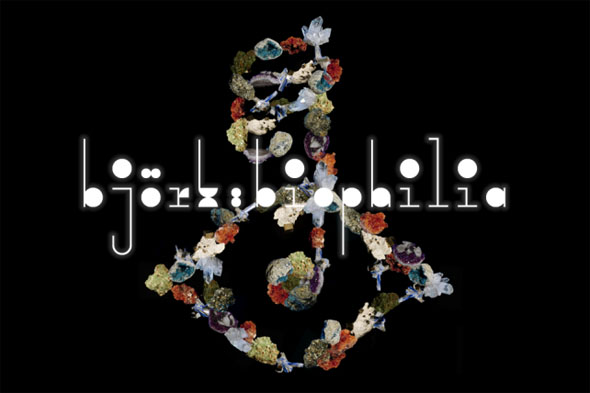 Despite her international musical profile, and the praise heaped upon her by such people as John Tavener and Alex Ross, I confess that Björk’s career has mostly passed me by – just another name in the vast and unknowable musical firmament. I was even unsure at first whether I should be including her in a blog about contemporary classical music. But the eclectic style of her music making, which admits influences from punk to Stockhausen, suggests a type of crossover composer very common these days.

Her latest project, Biophilia, is described as ‘an interdisciplinary exploration of the universe and its physical forces – particularly those where music, nature, and technology meet – inspired by these relationships between musical structures and natural phenomena, from the atomic to the cosmic.’ This sounds a little bit like either hubristic marketing or the abstract for a PhD thesis. In fact, it is, in the words of the BBC’s Mark Lawson, ‘one of the most complex multimedia projects in musical history.’

Biophilia explores the ‘love for nature in all her manifestations, from the tiniest organism to the greatest red giant floating in the farthest realm of the universe.’ But this is not just an album of songs about Mother Nature; just as Wagner wanted to unite the various aspects of music drama so that they were all consistent with his own artistic vision, Björk, in Biophilia, seems to be attempting to do the same, but in the digital age. The songs are explored through live shows, through digital record releases and lavish boxed sets, and in an iPhone and iPad app.

If you are an owner of either an iPhone or an iPad I suggest you stop reading now and download the app, especially as the mother app itself is free. It opens with an inspiring, if slightly tree hugging, voice-over from Sir David Attenborough, as we slowly zoom in on what appears to be a constellation of stars. A mysterious choir sings downward, clustered glissandi.  Just by itself the constellation is a fascinating multimedia project of its own. As you zoom in on ‘constellation’ names, which turn out to be the names of embedded multimedia projects, you hear snippets of sounds associated with them. The effect is totally beguiling. Apart from Cosmology, which comes free with the app, the projects themselves are in-app purchases. As yet, just two, Virus and Crystalline, are available to buy, but the project will gradually expand.

Each project (song doesn’t seem the word) starts with a description that links the idea to music in a fairly convincing manner. But, despite Björk’s avowed wish to perform these pieces in science museums, this is art not science; I was prepared to take the metaphors on face value and enjoy the dazzling multimedia presentations. In Crystalline this takes the form of a crystal game, which perhaps reflects the idea of building blocks that make up the hypnotic song that accompanies it. Virus, which at first seems like a love song, is in fact a rather disturbing take on how a parasite feeds off its host. The interactive video shows a virus slowly devouring a cell. Cosmology features a rolling graphic score that recalls twentieth century electronic scores by composers such as Stockhausen, Ligeti and Cage. It would probably be a good learning tool in school music lessons, even more so because all the projects also come with a rolling score of the music in proper staff notation.

Biophilia is being brilliantly marketed. I mean that as a compliment. As well as the app and live concerts, one will be able to own special versions of the music in CD, vinyl or two custom-made editions. This aspect is something of a revelation to me. When I first started buying music as a teenager I hankered after the physical form almost as much as the music itself. Gradually, bit-by-bit, it feels as if no-one owns recorded music any more; people download or subscribe to cloud services like Spotify. But here, even the electronic form has so much added value it evokes the excitement of buying the actual physical product. But more importantly it makes me want, for the first time in a long time, to purchase the physical product too. It feels like something special, just like that moment when, as a teenager, I first received the complete CD boxed set of Beethoven symphonies through the post.

In a world crowded with music, I wonder whether composers have much to learn from Björk’s Biophilia.