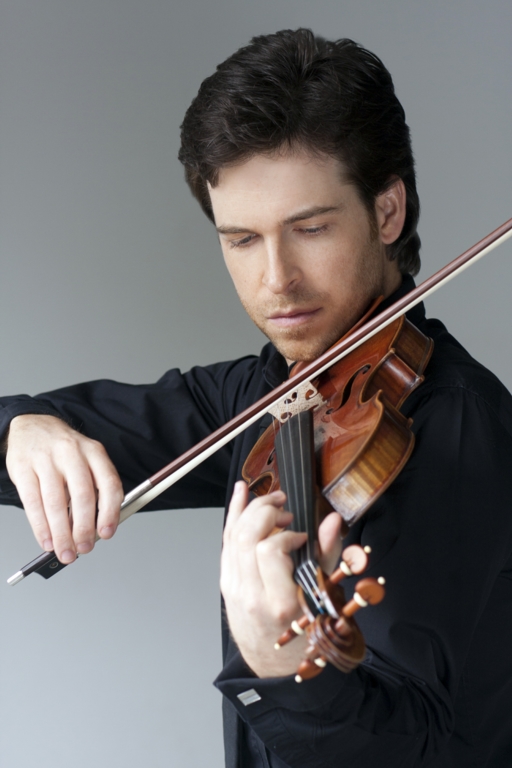 Christian Morris talks to Irish-born violinist Gregory Harrington, an emerging soloist based in New York, who has just released A Different World,an album of music by James MacMillan.

Well, I started violin when I was 4, studying at the Royal Irish Academy of Music with Kevin Kiely until I was 18. I then went to University College Dublin and studied International Business with an arts degree in Spanish, working in Dublin doing finance in a multinational to pay for lessons once a month in London with the wonderful Russian violinist Marat Bisengaliev. Eventually I did the auditions for New York, and came over to study at the Mannes College of Music with Sally Thomas, from whom I learnt a tremendous amount, and finally finished studying with Erick Friedman for a period of three years, who was a really wonderful teacher.

Unexpectedly actually… I was looking for a piece to perform at my London debut in the South Bank Centre back in 2000. So I had just come over to study in New York and spent a few days going around music stores here in New York looking for a contemporary piece to perform. I came across Kiss on Wood by James MacMillan, and was just so drawn to the sonorities and the musical language that he uses. I remember after putting down his score saying to myself “Yep, this is it…” and it has really taken off since then.

What excites you about a piece of music – what keeps you interested?

I think accessibility and a unique voice that I feel an affinity for is what excites and attracts me to new music. Accessibility for me has to be the main reason for performing a piece—and that goes beyond technical or musical terms—I mean it more that I have to feel that I can perform this convincingly to an audience so then the composer’s intention is satisfied and my interpretation is completely organic. That way, you have done everything that you can to present it in front of your audience and it’s personal taste from the audience whether they like it or not.

And what turns you off ?

Probably “inaccessibility”—you have to be able to convincingly connect with your audience through the music, so if I don’t feel a connection and can’t transmit that to the audience then I won’t play it. Saying that, it’s just a personal taste and no reflection on the composer’s music. Heifetz never played Bartok as he just didn’t feel affinity for it, but Bartok’s music can be glorious!

Do you ever read unsolicited scores?

Yes, I do—unfortunately you can’t perform or commit to all that you read—but I do enjoy getting them—concerti and chamber works especially. I think the difficulty at this stage is when you are approached by a composer who wants you to perform their work—it is easier with chamber music but with a concerto not so much. Contemporary concerti I love performing (I am performing Ian Wilson’s concerto for violin and orchestra Sullen Earth in Mexico in March), so if there is a viable plan for ideas and connections with orchestras and conductors that can mutually work then it is easier to start approaching that project—but it is difficult to take an unknown work “cold” to an organization.

You have dedicated a whole album to the music of James MacMillan. What is it that attracts you to his work?

I think it started with a very personal relationship with Kiss on Wood that I performed in the South Bank in London. The music is a serene meditation about that moment when the crucifix is slowly unveiled and people are invited forward to kiss the wood of the cross. It is based on the Good Friday versicle, ‘Ecce lignum crucis in quo salus mundi pependit: Venite adoremus’ (‘Behold the wood of the cross on which the saviour of the world was hung: come let us adore him’).

For me it represents something quite different: it represents a conversation with my mother. She passed away suddenly when I was living in Madrid so I never had that chance to say goodbye… and at 20 emotions can really consume you in a manner that you can’t verbalize, so music became the release and this piece in particular became the voice for what I felt. Every time I performed this piece it embodied all the feelings of an unfinished conversation that I never had a chance to conclude—from anger and frustration to calmness and innate peace, with the inevitability of that unfinished conversation resolving away into nothingness. She was such a huge part in who I became as a musician and an individual.

Every work has their intended interpretation, but it is only when those sounds of a piece of music represent an organic individual story that music breathes life.

You play music in a wide variety of styles, often mixing genres in a concert. Is there a reason for this?

It just depends on the audience and the venue you are playing—for example, you can’t play some wonderful contemporary music to an Irish audience in New York that is used to traditional music! I performed a concert in China to about 2,000 students in Shanghai so, amidst all the classical, it’s nice to throw in a transcription of Radiohead or Dylan that they can really relate to. And its applicable for every demographic that you perform for—just know your audience first and foremost.

I have just started recording a new album of unaccompanied Bach which I am excited about—that should be released sometime in the latter half of next year. In the short term, I want to start promoting the MacMillan CD to contemporary festivals and concert series in the US and Europe as the reviews thus far have been fantastic. I heard James’s new violin concerto in Carnegie Hall when Vadim Repin gave the US premiere in March and was blown away by what a powerful and moving piece of music it is. I have spoken to James about it and it’s a concerto that I want to learn and offer some orchestras in the coming seasons. There is a wonderful concerto by Ian Wilson that I am performing in March in Mexico that I have to start working on over the next month.

In the longer term, I want to diversify my discography with more recordings and build on what I already have—I am speaking with Meira Warshauer about collaborating on a concerto and recording it. She has just released a new disc of her music (Symphony No. 1 Living Breathing Earth and Tekeeyah (a call), a concerto for Shofar and Trombone), which is an exquisite sounding disc and I really love the palette of sound that she creates for an orchestra. So, more concertos, begin looking for good management and in a different vein I have always wanted to compose for a film score and look into radio.

How can people find out more about you?

James MacMillan’s disc A Different World is available on iTunes and Amazon, which is a nice place to start in terms of sound and further info can be found on my website and my artist site on Facebook: