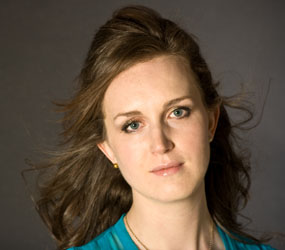 Christian Morris talks to the composer Helen Grime who, amongst many other things, has just started as Associate Composer with the Hallé Orchestra.

My grandparents both taught music and my mother does too, so there was a lot of music in the house from an early age. My mother used to play me a lot of classical music. When I was very little I can remember listening to Ravel, Debussy, Bach and lots of other things. It was a huge part of my life. I started playing the piano and oboe later on. My brother and sister are both very musical too. We were lucky; we had a great education in Scotland. In primary school, at about the age of 10 or 11 I’d go out of school, just across the playground, for my piano, oboe and even composition lessons. Later the school we went to was a state school but it had a specialist music scheme in it. We used to do a lot of music during the day.

Yes. It was seen in our school as an important part of being an all-round musician. Composition was something that we were all given the opportunity to do. We were lucky, in that all this was paid for by the government.

And this was a specialist school?

Yes. It was called the City of Edinburgh Music School. There’re a few others in Scotland. There’s one near Aberdeen and one in Glasgow. I’m not sure there’s anything like that in the rest of the UK outside privately funded schools such as Wells.

So this was how you started composing?

We were offered composition lessons, but it was always something I was interested in. We also had some great composition teachers. My first composition lesson was with Sally Beamish. I also had lessons with Halflidi Hallgrimsson and others. It was probably when I was about 11 or 12 and then it was something I kept doing. By the time I was 18 it was as important as the oboe and I didn’t really know what to concentrate on. But then I went to the Royal College of Music to do joint principle studies, which gave me a bit of choice.

What was your earliest success as a composer?

Perhaps the Oboe Concerto I wrote for the Meadows Chamber Orchestra. I was also the oboe soloist. It was commissioned by a real supporter of mine, the Edinburgh pianist Peter Evans. He’d also commissioned a composition when I was younger and I’d written some piano pieces for him. The Oboe Concerto won an award and I was also able to play it with the Royal College of Music Sinfonietta when I was studying there. It was a really big thing for me because it gave me some exposure, opening-up other possibilities and opportunities.

Would you say that the oboe has had a wider impact on your musical style?

Yes. If I think about the type of music I write, melody is very important. Also, the sort of registers I like to write in. It’s a funny thing, but I do really like high registers. I do wonder whether playing that kind of treble melody instrument is the reason for this.

Some of your compositions, such as Virga, The Brook Sings Loud or To See the Summer Sky seem reflect an interest in your surroundings or nature. Is a sense of place important to your work?

I’m not sure. I think the titles come more from poetry. That’s quite important to me: what I’m reading, what I’m going to see. I’m always looking for extra-musical things that might spur the imagination, but I’m not sure about a sense of place. With my orchestral piece Virga it’s more the idea of clouds and that then initiates a temporal idea with things moving at different speeds.

So you would say that the inspiration is more a visual element that becomes converted into music?

Definitely, though I’d say it’s only important right at the beginning of the process. It then so becomes a musical idea that I move very far away from that during the piece.

What piece are you most proud of and why?

My ideas change about that all the time. I suppose it’s often the thing that you’re working on at the moment. With each piece I try to go further in some way. I’m working on a piano trio at the moment and the piece before that was an oboe quartet. The quartet has not been performed yet – the premiere is next year – I think I think I’m quite proud of that at the moment…but we’ll see. When I hear it I might completely change my mind!

Do you have particular techniques – ones you come back to again and again? Tell us a bit about them.

I don’t know if there’re any particular techniques I could put my finger on. For me it’s about the tension between the natural and intuitive and a sense of control, where everything is interrelated.

And what is your composing routine. When do you like to write?

It just depends on the stage of the piece. I find it really difficult to get going, but if I’m into a piece then I can work all day on it, if I have all day. I’ll get up and start working first thing but I do really like to work at night. When it’s dark it feels quieter and I can focus more.

Oliver Knussen has conducted your work. What was it like to work with him?

I’ve worked with Oliver Knussen quite a bit. He such a fantastic musician and, apart from the fact that he is a great composer, he’s got a brilliant ear. He’s also very clever but not intellectually intimidating. His music has been an important influence on me.

And his music is also very natural and intuitive-sounding, whilst also being very worked-out.

Exactly. And I think it is very detailed as well. That’s something we both have in common. The fact that you might have written a five minute piece but it’s got, maybe, twenty minutes of music in it.

And what other composers have influenced you?

I would say Ravel and Debussy were real influences. I was always drawn to their music as a little girl. Early music too: Monteverdi, Purcell and Byrd especially. Later on, as I’ve said, Knussen was important; the first time I heard his music I was just bowled over by it. Also Ligeti and Takemitsu. When I first heard the orchestral music of Takemitsu I was struck by the harmonic sound world and the fact that it was a little bit Ravel but gone to a new level. Also some Lutoslawski.

You seem to be drawn towards composers that are perhaps less rigid in their approach.

Yes, though I was also going to mention Boulez. The fluidity in his language has been an influence. And his harmony is often very beautiful. But yes, on the whole, I tend towards composers that embrace lots of things in their music. Carter’s music has also been very important for me.

A lot of success can be down to the people that you meet. Grab every opportunity that you can. If you get an opportunity to go and study somewhere then do it. For me, I went to study in Tanglewood in 2008. This was really important since I made a lot of contacts there and three of the pieces I’m writing for next year are for American groups. You never know when you write a piece for someone or somewhere what it might lead to. Though it’s difficult – it doesn’t come naturally to me – you do need to get yourself out there. But try to get the balance right. You don’t want to try to be somebody that you’re not.

You have just started as associate composer for the Hallé Orchestra. What plans do you have for this three-year partnership?

The performance of Virga on Thursday 17th November in the first concert with them. The first new piece is for 2013, so I will start to think about writing that next year. I’m looking forward to going to rehearsals before I write it in order to get used to the Hallé’s unique sound: very lyrical with a gorgeous string sound. I am also really excited about developing a relationship with the players. Quite often when you write an orchestral piece you know that you’re going to get one rehearsal on the day and, because you want it to be played by other orchestras, you think less about the individual orchestral musician. So it will be nice to get the chance to write them something more personal.

You’ve mentioned that you’re currently working on a piano trio. Who is that for?

That’s for an American group, the Claremont Trio. The premiere will be in Boston. After that I’m writing a trio for the Santa Fe music festival. I’ll also be writing an orchestral work before the Hallé piece but that is, as yet, unannounced, so I can’t go into further particulars.

I probably would like to, but I don’t see myself writing a full-length opera. I’m not sure I have that in me!

Do you see yourself more as an instrumental composer?

Most of my music has been instrumental, so I do want to write more vocal music, but I would also wish to continue writing orchestral and chamber music. I’ve got some plans for a string quartet after I have done some of the orchestral pieces, something I’ve held off doing since I’ve not quite felt ready for it. I’m looking forward to getting my teeth into that.

Where can people go to experience your music?

My music is published by Chester. A good place to start is my composer page on their website . Also, Chester is part of Schirmer, and it is possible to preview my scores there. Virga will be played by the Hallé on Thursday 17th November Details here . You can also find more information about me on the Hallé website .