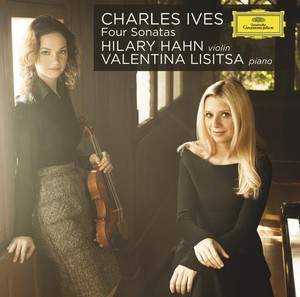 Charles Ives expressed ambivalence in later life towards his Violin Sonatas, believing them to be too conventional. Ives claimed that his tendency to rein in his more experimental side was a response to the incomprehension with which his music was met. The story that lies, in particular, behind the Third Sonata makes for painful reading, consisting as it does of his experience of hearing a supposedly great virtuoso attempting to play through his First Sonata and not being able to get beyond the first page. According to Ives, the player said: ‘This cannot be played. It is awful. It is not music, it makes no sense’.

Ives was probably correct, however, in describing these works as less radical than some of his others. They are not as harmonically challenging as, say, his Concord Piano Sonata, and there isn’t the vivid gaudiness of Three Places in New England or the transcendental mystery of Central Park in the Dark or The Unanswered Question. The language in these sonatas is, however, unmistakably Ives. Tonality is never far away, often it is resolutely in the foreground, but it is constantly twisted in unexpected and novel directions. As in many of his works, Ives quotes widely and freely from popular song. In the second movement of the Second Sontata, entitled In the Barn, for example, he uses, in a four minutes, The Battle Cry of Freedom, Sailor’s Hornpipe, Turkey in the Straw, The White Cockade and his own Four Ragtime Dances No.1. But the effect is not like Putnam’s Camp from Three Places in New England, where the tunes are displayed with brash effrontery.  Instead, the pieces, though clearly audible, are brilliantly and ebulliently integrated. It is tremendous fun.

The performances on this new disc are very much to be recommended. Hahn plays with total control in music that is often extremely technically demanding, shifting deftly between the various moods – from frenetic rhythmic activity to velvety tenderness – that Ives’s frequent borrowing engenders. Lisita accompanies with both sensitivity and authority, well in command of a part that at all times equals and sometimes, as in the Fourth Sonata, exceeds in difficulty that of the violin. The recording is nicely intimate. Some may find the piano a little far forward at times, but this is appropriate in music that presents soloist and accompanist as equals.

The rest of the month’s releases.

Naxos has released a number of recordings by Swiss-born composer Ernst Lévy with the Polish National Radio Symphony Orchestra, including: Concerto No. 1 for Cello and Orchestra played by Scott Ballantyne; Symphony No.7 and Symphony No. 11 conducted by David Oberg; and a recording of Orchestral Suite No. 3, which also contains a useful spoken introduction to Lévy and his music. Also on Naxos is a disc featuring chamber music by Catalan composers Robert Gerhard, Xavier Montsalvatge and Gaspar Cassadó and, as part of their ongoing survey of the composer, Symphonies No. 6 and 7 by Howard Hanson with the Seattle Symphony Orchestra and Chorale under Gerard Schwarz. Decca has released a new recording of Gorecki’s Symphony No.3 Symphony of Sorrowful Songs played by the Warsaw Philharmonic Orchestra under Kazimierz Kord; and performances of Shostakovich’s Piano Concerto nos. 1 and 2 and Symphony No. 9, featuring Peter Jablonski, Christina Ortiz and the Royal Philharmonic Orchestra under Vladimir Ashkenazy.  Nonesuch, finally, have released a disc of music by Vladimir Martynow played by the Kronos Quartet.