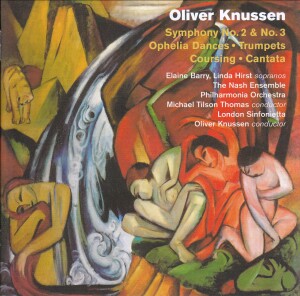 After a crazy couple of weeks, including a PhD viva and the presentation of a paper at the Sacher Perspectives Conference in Cardiff (same day as the Six Nations final – bravo Wales!), I’m happy to be able to get the keyboard beneath my fingers again and do some blogging.

I’ve always hoped, as an absolute minimum, to write regularly here about new music concerts and CD releases. It keeps me up to date with what is going on and, I hope, provides a useful point of information for visitors to CT. Unfortunately I managed to miss the CD roundup last month, so, completist that I am, I will also include releases from February in this month’s roundup.

I’ve two specific CD picks this month, both of which are available on NMC. The first is a recording of Oliver Knussen’s Symphonies No. 2 and 3; Trumpets, for soprano and 3 clarinets; Ophelia Dances, Book 1; Coursing, for chamber orchestra; and Cantata, for oboe and string trio. I’ve always loved the music of Knussen; he is a composer who, in works such as Flourish with Fireworks and the Horn Concerto, manages to produce a bright, attractive musical surface whilst in no way compromising the artistic integrity of a given work. Those who have got to know him via such pieces might, however, be a little surprised by the works on this disc, which come from a time when he was using classical serial techniques (later works were marked by greater octatonicism and rotational serialism). Whilst, perhaps, less immediately appealing, they still contain Knussen’s trademark brilliant orchestration, lively textures and a penchant for plenty of variety in a short span. The First and Second Symphonies, for example, are in 3 and 4 movements respectively, but only last around fifteen minutes each. It’s often said about the composer that, even when short, his works feel substantial. It is nowhere more true than in the pieces presented on this excellent disk.

The other recommendation on NMC is Michael Finnissy’s Second and Third String Quartet’s played by the Kreutzer Quartet. I once attended a seminar given by Finnissy before a pre-concert talk, which featured his English Country Tunes. The often-acid tone of what he said to us was very much present in that piece, ending as it does with the pianist practically crucified on the piano. It is the same here. The Third Quartet, for example, is Finnissy’s ‘response to the natural world and man’s place in it’, but, as in English Country Tunes, even passages of relative serenity feel tinged with bitterness. At the end of the quartet the presence of real birdsong seems only to emphasize the ‘unnatural’ i.e. contrived music of the quartet. Man, he seems to be saying, is an impostor in the natural world.

Also new on NMC is a disc of music by Morgan Hayes, including his Violin Concerto with Keisuke Okazaki, conducted by Christopher Austin. Naxos have released a number of interesting recordings over the last couple of months including: a complete survey of the orchestral works of Claude Debussy with Jun Märkl conducting the Orchestre National de Lyon; Pederecki’s Sinfoniettas, Oboe Capriccio, 3 Pieces in Old Style and Serenade with the Warsaw Chamber Orchestra conducted by Wit; Ross Harris’s Symphonies Nos. 2 and 3 with the Auckland Philharmonia conducted by Letonja; Maxwell Davies’s Symphony No. 1 and Mavis in Las Vegas, with the BBC Philharmonic conducted by the composer; and Tadeas Salva’s Cello Concerto, 3 Arias, Slovak Concerto Grosso No. 3 and Preludes with various soloists, the Slovak Radio Symphony Orchestra conducted by Marián Lejava. Hyperion have released a new recording of Benjamin Britten’s Violin Concerto and Double Concerto played by the BBC Symphony Orchestra under Ilan Volkov; a disk of Shostakovichmusic for viola and piano with Lawrence Power and Simon Crawford-Phillips; and a collection of choral works by Bo Hansson performed by the Royal Holloway Choir under Rupert Gough. On Nonsuch there is a new disk of music by Vladimir Martynov played by the Kronos Quartet; an intriguing sounding disk of music by Penderecki and Jonny Greenwood; and a new recording of Philip Glass’s opera Einstein on the Beach with the Philip Glass Ensemble.