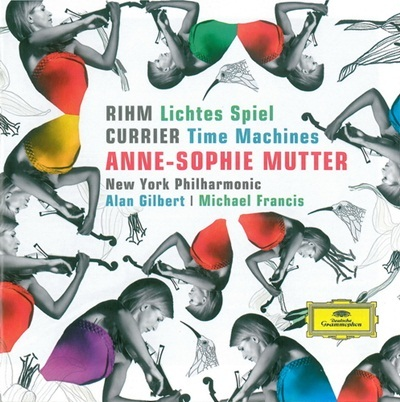 I said in one of my earliest blog posts that I didn’t envy the job of concert reviewers. Having to make a snap judgement about a piece of music strikes me as a thankless job, especially if, after a few years have passed, the work you said was a failure is acknowledged by everyone as a masterpiece (or vice versa). CD reviewing might be considered rather easier – one can listen to a piece many times to form a judgement – but even then you often form an opinion in a relatively short period of time. Sometimes it has taken me years to get to know, understand and finally love a piece of music, making me nervous when I come across something I don’t like.

Which brings me to Deutsche Grammophon’s new release of music by Wolgang Rihm, Krzysztof Penderecki and Sebastian Currier featuring violinist Anne-Sophie Mutter. I found myself, at best, perplexed by the two pieces by Wolfgang Rihm. The first, Lichtes Spiel for solo violin and orchestra (New York Philharmonic), has an attractively languorous Bergian romanticism but, seemingly, very little sense of direction or shape. And in one seventeen-minute movement it feels hopelessly spun-out. The double bass player Roman Patkoló joins Mutter in Rihm’s Dyade, for unaccompanied double bass and violin. They both play with commendable commitment, but, though there is much more drama and variation in this work, it still feels insufficiently focused. As if to emphasize this point, it is prefaced by Penderecki’s Duo Concertante, for the same two instruments. At less than half the length of the Rihm it is brilliantly purposeful and urgent, an object lesson in writing for limited resources. The final piece on the disc is Currier’s Time Machines, a concerto for violin and orchestra in seven movements, each inspired by an element of time. I loved the work’s colourful orchestration and minimalesque pulsating rhythms, but also its moments of extended lyricism, as in the last movement Harmonic Time, which seemed to evoke something of the vast and unknowable cosmos. Mutter and the New York Philharmonic play with both laser-like clarity and emotional commitment.  I would be happy to own this disk, but, in the first instance at least, only for the Currier and Penderecki.

Naxos has released a new disk of piano music by Arvo Pärt, played by Ralph van Raat. It offers a fascinating overview of the composer’s changing style. The first works – Piano Sonatine, No.1 and No. 2 and Partita – come from the end of the fifties and are in a tonally rich neoclassical style influenced by Shostakovich and Prokofiev. The central work of the disk is the exquisitely poised Für Alina in the pared down manner made famous in such works as the Passio Domini Nostri Jesu Christi secundum Joannem. If, like me, you found that work just a little too cold and ascetic, it is worth checking out the last work on the disk, the both violently impassioned and lyrically introspective Lamentate for piano and orchestra, written in 2002. Pärt describes the work as a lamente ‘not for the dead, but the living.’ It makes for powerful listening, especially in this excellent recording.

Also on Naxos is something that, for me, was a bit of a discovery: a disk of music by Canadian composer Jeffrey Ryan. It contains his Linearity of Light, the triple concerto Equilateral and Symphony No. 1, Fugitive Colours. The first and last works are played by the Vancouver Symphony Orchestra, who are joined by the Gryphon Trio for the second. The inspiration for Linearity of Light, writes the composer, ‘is visual-the qualities and properties of light’, a premise that gives birth to a highly engaging work of often dazzling orchestral colour. Breathless, the first movement of Equilateral, begins rather like a speeded up version of the second of Knussen’s Two Organa, developing into a movement as restless as its title suggests. This is followed by a beautifully contemplative second movement that makes reference to Anglican plainchant and the Hebrew words of the Mourner’s Kaddish. The final movement is a ‘vibrant affirmation of the dance of life’ that is, nevertheless, so relentlessness that it might also suggest a hurtling towards the grave. Symphony no. 1: Fugitive Colours, continues the composer’s interest in colour. The first movement builds an effective structure out of a knitting analogy in which ‘one colour of thread, about to be dropped is woven in and wrapped around another colour about to begin’. The brooding and enigmatic second movement, Nocturne, essays rich reddish-purple, contrasting with the rapidly changing colour in the aptly named scherzo third movement Light: Fast. The last movement, Viridian, is based on a cool green. The music throughout this disk is marked by brilliant orchestration, pulsating (often ostinato) rhythms and a lucid tonal style. The performances are excellent .

Nimbus’s The Bad Tempered Flute features the flute music of Andy Scott with flautists Paul Edmund-Davies, Clare Southworth and Andy Findon, pianists Tim Carey and Peter Lawson and harpist Lauren Scott. Steve Reich’s WTC 9/11 (see contrasting reviews here and here), featuring the Kronos Quartet, is now available on Nonesuch. Robert Daugherty, a composer known for the approachability of his style, has a new disk, Fire and Blood, out on Warner Classics. Naxos’s clutch of new music recordings this month include: a double-disk set of chamber music by Robert Helps; James Whitbourn’s Living Voices and Son of God Mass; Penderecki’s Viola Concerto and Cello Concerto No. 2; a disk of Azerbaijani Piano Concertos; and Jenny McLeod’s Emperor and the Nightingale.

Nimbus is currently taking pre-orders (up to 31st October) for a recording of Richard Blackford’s Not in Our Time (see review here) at a reduced price of £9.99 (£14.99 thereafter). Also soon to be released will be a disk of music from the winners of the Abbey Road Studios 80th Anniversary Anthem Competition. The winners, who in the classical category were Daniel Brinsmead, Daniel Elder, Tina Andersson and Zhangyi Chen, were given the chance to record their works with professional singers and the London Symphony Orchestra. I hope to be able to review the disk when it is released.