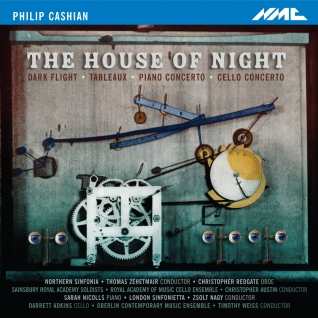 NMC’s new disk dedicated to the music of Philip Cashian spans some ten years of his output. It includes his Tableaux for small orchestra, Cello Concerto, Dark Flight for six cellos, The House of the Night for oboe and twelve solo strings and his Piano Concerto. I’ve only spent the morning dipping into it, so will limit myself to saying that this is exciting and brilliantly inventive music, well worth checking out. Extracts are available on the NMC website together with an interview with the composer. The complete disc is available on Spotify.

EMI have just released a new recording of Britten’s War Requiem, with Antonio Pappano conducting the Orchestra, Coro e Voci Bianche dell’Accademia Nazionale di Santa Cecilia with soloists Anna Netrebko, Ian Bostridge and Thomas Hampson. It’s a worthy and powerful addition to the catalogue, though I found the unfamiliar timbre of the Italian choir jarring in this most English of repertoire. It also faces stiff opposition, not least from Britten’s own recording and – my personal favourite – Richard Hickox with the London Symphony Orchestra and Chorus.

On Naxos there is a programme of flute music by Latvian composer Pēteris Vasks. It contains his Flute Concerto, Sonata for Flute and Alto Flute, Aria e Danza and Ainava ar putniem (Landscape with Birds) performed by Michael Faust, Patrick Gallois (flutes), Sheila Arnold (piano) and Sinfonia Finlandia. Also on Naxos, Jeremy Filsell’s Tomorrow Shall be my Dancing Day, Epitaph, If God Build Not the House and Windsor Service; and David Briggs’s Pange Lingua and Messe pour Saint-Sulpice receive world première recordings by the Vasari Singers conducted by Jeremy Backhouse. The composers accompany on the organ. Finally on Naxos, there is a new album containing John Cage’s A Book of Music for two prepared pianos, Suite for Toy Piano and Music for Amplified Toy Pianos performed by Xenia Pestova and Pascal Meyer.

Chandos, meanwhile, have released a new album of music by John Adams with the Royal Scottish National Orchestra conducted by Peter Oundjian. It contains his Doctor Atomic Symphony, Short Ride in a Fast Machine and Harmonielehre. It’s also worth checking out Chandos’s end of stock, better than half price, page; there are a number recordings of music by living composers to be found there, including by Michael Berkely, Jonathan Dove, James MacMillan and David Matthews. Also of interest to many will be a new release on DG of Boulez conducting the complete Mahler Symphonies. I am intimately familiar with his recording of Number 6 (‘the only sixth, despite the Pastoral’ as Berg said), included in this set. Boulez often divides opinion, of course, but I found it extremely exciting – not remotely ‘cold’ as he is so often characterised. The rest of the set should, therefore, be worthy of exploration.