On Moving to Mac 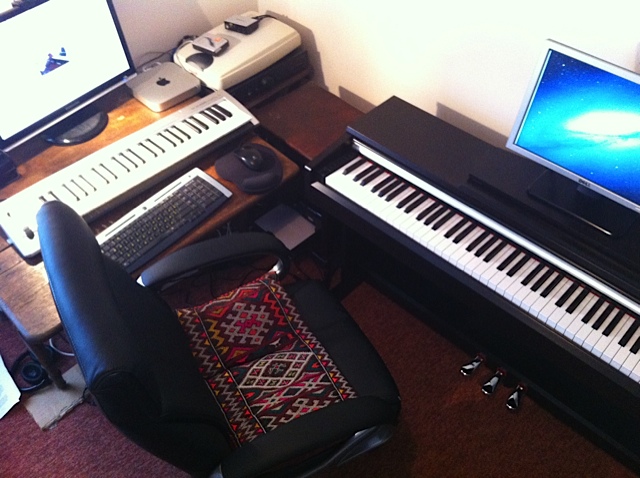 My home office setup. The computer is that elegant little box to the right of my main monitor.

Many composers I talk to, even if they use a Windows PC, express an interest in swapping to Apple Mac. That was certainly my experience when I asked several composers to write here about using computers when composing. Apple computers, say the fanboys, are more intuitive, not prone to viruses, work better if you are already part of the Apple ecosystem, and, of course, they look rather pretty. The detractors argue that they are expensive, have less software, are, in actual fact, no more easy to use than Windows, and leave you less able to interact with the rest of the, mostly Microsoft, world.

I bought a Mac Mini before Christmas as a replacement for my ageing Windows 7 PC. There was no doubt that I was attracted to the prettiness of Apple computers, especially the edge-thin new iMac. In fact, I’d waited for months for the release of the new all-in-one desktop. Unfortunately, when it appeared it was £100 more than I had expected, and this finally persuaded me against it. It was, indeed, too expensive.

For those abandoning Windows PCs, however, there is another excellent option. For £499 you can get a bottom of the range Mac Mini. This means you have to supply your own keyboard, mouse, monitor and even DVD drive, but you still end up with the full Mac experience. I went for the slightly more expensive Mini: the quad core, 2.3GHz version with 1TB hard drive for £679. I wanted a bit more grunt for running Sibelius Sound Library. Buying a Mini also had one other advantage. With the exception of the expensive 27-inch iMac, all other flavours of Mac apart from the Minis come with memory that cannot be changed. This means you can upgrade the memory only when purchasing. Unfortunately, buying memory from Apple is like buying a cup of tea from Claridges: expensive but not discernibly better. I also had no idea how much I’d need. I could have ended up spending a fortune upgrading the memory, with no discernable benefit, or not putting in enough and permanently crippling my system. A Mac Mini comes with 4GB of memory that can be expanded by the user to 16GB. This allows you to upgrade when you see the need.

My next worry was how compatible it would be with all of my old Windows peripherals. Would I face another expense as I replaced my old USB external hard drives, keyboard, mouse, scanner, USB mini piano and even an old external CD/DVD drive? In fact, they all worked perfectly. The keyboard (for writing, not playing) was a bit odd, since some of the keys were in different places, but there are various tweaks you can make with free software, and it is now much like my old Windows keyboard. There is one glorious exception to this, however: the Windows key no longer does anything, This, for me, is a huge boon whilst using Sibelius; it used to drive me mad when I accidently hit the Windows key instead of Alt or Ctrl and the Start Menu popped up.

It would be unfair of me to compare the performance of my new machine to my Windows PC. That was very old indeed, so it will come as no surprise to say that the new Mac is smooth and fast. For those used to Windows 7 I would say that transferring to OSX10 is quite painless. They share an awful lot in common. Windows Explorer and Mac Finder are quite similar (though I still prefer Explorer I must admit), so too are the Taskbar and Dock. There are the same concepts of desktop, trash and so on. You won’t be able to use Internet Explorer, though there are so many excellent browsers now that that hardly matters. The real benefits of Mac come when you have already bought into the Apple ecosystem. I already owned an iPhone. This seamlessly integrates with the Mac. If I type a note, it appears on my Mac. If I take a photo, it appears on my Mac. An open tab on my phone appears on the desktop. And so on and vice versa. Cloud technology isn’t, of course, exclusive to Apple but Microsoft is a long way behind with integrating their phone and tablets in Windows 8, an operating system that has anyway had mixed reviews.

I use two programs more than any other on my computer: Sibelius and Word. If you are a light user of Word, you could opt for Apple’s Pages, which is much cheaper than Microsoft’s software and offers some compatibility with it. I prefer to use what everyone else has, and so bought the Mac version of Word from the outset.

The good news with Sibelius is that, from day one, the shipped software has supported both operating systems. I bought Sibelius 7 for my Windows PC, so I could install it on the Mac without further expense. On the old computer I couldn’t run the Sibelius Sound Library at all, so had to stick with general MIDI. Interestingly, even on a computer that, by any measure, is powerful, my new Mac will only run smallish scores with the Sibelius Sound Library. This leads me to think that I will, indeed, need to buy more memory. The sounds also load quite slowly on a spinning hard drive, so, if you can afford it, I would go for a Mac either with an SSD drive (like those used in phones: they are very fast but hold less data) or a Fusion Drive (which combines SSD with older technology to make a drive that is both fast and capacious). I could have specified a Fusion Drive on my Mac Mini for an extra £200. Again, it was too expensive…

The only other music programme I missed from my PC was Sound Forge, which allowed me to edit sound files in preparation for burning CDs or putting them on my website. Audacity, however, is a wave editor that, it turns out, is rather better than the version of Sound Forge I was using. It is also free. Mac also, finally, ships with a rather good MIDI sequencer in the form of Garage Band. It’s not aimed at professionals, but for those who occasionally dabble it’s a decent solution, and integrates with versions on iPad and iPhone.

In conclusion, whether you move to Mac or not (or, indeed, are on Mac and are considering moving to Windows) will increasingly depend on other factors, especially how much you value integration with the other technology, such as phones and tablets. I think other oft-quoted factors are less important. Viruses are an increasing problem on Macs and, actually, with proper precautions never gave me a serious problem in more than ten years of Windows PC use. Neither would I say that OSX is particularly ‘easy’ or ‘intuitive’ compared to Windows 7. They are very similar. Apple computers are definitely pretty but, in all honesty, I tend to forget about the ergonomic lines of a monitor when I am hard at work. And my office is always such a mess that a sleek iMac would probably ruin the look.

The fact of the matter is, both Windows and Apple desktop systems are incredibly capable and have all of the music software you will ever need. In my opinion, however, Apple, because of its tradition of building both software and hardware, has a much better integrated ecosystem. My iPhone and Mac speak effortlessly to each other. If you are an Android user, the Apple vs. Windows matter is more open. Google do offer a third alternative in the form of their Chromebook. This runs entirely on the Internet, however, and so offers few useful programs for musicians. Until Microsoft can shift more phones and tablets and convince the world that Windows 8 works, I remain convinced that moving to Apple Mac was the right decision for me.