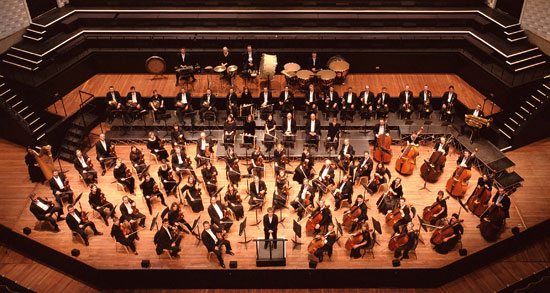 Using their extensive concert database, the people at Bachtrack have put together a fascinating analysis of classical concerts during 2013. Unlike CT, their listings do not concentrate on contemporary music so, using their data, it is possible to perform a crude assessment of the state of contemporary classical music as compared to classical music in general.

Most remarkable has been the extent of the 2013 Britten 100th birthday celebrations; internationally the composer was the fourth-most performed during the year (and the most performed in the UK), above such big beasts as Schubert and Brahms. Only Mozart, Beethoven and Bach did better. Perhaps surprisingly, given it is one of his more difficult and expensive works to mount, the most performed of his oeuvre was the War Requiem. Two other anniversary composers also did quite well: Poulenc climbed a little to 30th place, whilst Lutosławski moved from 79th in 2012 to 48th in 2013.

Hearteningly, a high proportion of music performed in 2013 is relatively recent. The graph at the bottom of their infographic shows concerts and operas divided by historical period. In all parts of the world surveyed, twentieth and contemporary music make a hefty proportion of total works performed, even if music by more recent composers makes up a much smaller fraction of this total. Of performances of music by living composers Arvo Pärt comes highest at 38, James Macmillan second at 45 (he is highest in the UK) and John Williams third at 77. More disheartening is the extent to which composition is still dominated by men. The highest entry for a female living composer is Judith Bingham at 202, followed by Unsuk Chin and Kaija Saariaho. The situation, incidentally, is not much better for conductors, with only Marin Alsop breaking into the top 100.

Most people would identify Britten as being at the softer end of twentieth-century music and would say that his popularity tells us something about enduring musical tastes: that, like the Queen (as Maxwell Davies cheekily revealed), most concertgoers have a hard time with dissonance. It is confirmed not only by the popularity of Pärt, Macmillan and John Williams in the Bachtrack listing, but also by my much less scientific analysis of CT’s 2013 concert listings where Britten is, again, the clear winner, with Steve Reich second, Stravinsky third and John Adams fourth.

In all this, however, I think that there are signs that audience tastes have matured. In my own experience as a listener one is, in the first instance, drawn to works are closest to the tonal music we tend to experience as children. When I first heard Britten’s War Requiem aged 14 I thought it was the most astonishing racket after Mozart’s K.626. Gradually my ears accustomed and I am now shocked by very little, even if I am occasionally bored or outraged by bad contemporary music. Audiences appear to be going through the same process. They still favour, and probably always will, music that still retains some kind of pitch centre and melodic line, but are nevertheless becoming more adventurous in their tastes – after all, there is plenty that does challenge in Britten, Stravinsky, Macmillan, Reich, Adams and even, away from the big Hollywood tunes, John Williams.

One last thing that came out of digging around CT’s 2013 concert listings was the sheer volume of living composers, some 450, who had music performed during the year. CT, just like Backtrack, does not pretend to be definitive, so this must represent a tiny proportion of all of those active in the world. That is heartening indeed. It is, of course, for audiences to provide the sifting that will ultimately decide the fate of all of these composers. That they have this year welcomed a twentieth century figure – Britten – above such old warhorses as Brahms and Schubert is a great encouragement to those of us stalking around the periphery (wrongly) believing that no one needs New Music.