Record of the Month: A European Odyssey 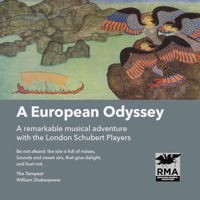 If you buy one CD set this month or, for that matter, over the next twelve, you should consider A European Odyssey, A remarkable musical adventure with the London Schubert Players. Released on Nimbus, the three-disk set is the fruit of the Invitation to Composers project that, since 2009, has challenged composers to write new works in response to established European chamber pieces.

Invitation to Composers was developed by pianist, founder and Artistic Director of the London Schubert Players, Anda Anastasescu. It has had two incarnations. The first ran from 2009-2010, the sources of inspiration being works by Schubert, Mendelssohn, Saint-Saëns and Messiaen. The second, from 2010-11, used George Enescu’s Chamber Symphony for 12 Solo Instruments as well as works for unusual combinations of viola solo, piano solo and strings and soprano, piano and strings.  The chosen compositions were work-shopped and performed in a series of events in the UK, France and Romania.

The scope of this marvellous project was too large to make a complete survey of all the works performed, but this collection gives a generous selection. On disc one there are three of the inspiration works: Mendelssohn’s epic Concerto for Violin, Piano and Strings, Saint-Saëns’ Septet op. 65, remarkable for its inclusion of solo trumpet, as well as the aforementioned Enescu, a work of searing introspection. The subsequent two disks contain 14 of the works written in response to the models, not just to those on disc one but also Messiean’s Quatour pour la Fin du Temps, Schubert’s Trout Quintet and two based upon the viola solo, piano solo model. The composers represented are from all over continental Europe and beyond and of all ages. The styles too are satisfyingly diverse; it is clear that scores were chosen simply on compositional merit and without stylistic preconceptions. On the one hand, for example, there is Ana-Maria Avram’s imaginative rendering of Ten Romanian Songs from Bela Bartók’s collection. Full of attractive tunes, often presented with witty panache, it is easily accessible without dumbing-down. On the other there is the eerie nocturnal world of Eberhard Eyser’s The Nightingale was Singing all Night Long or Adina Dumitrescu’s bracingly uncompromising J’ai trouve les Histoires. Some of the recordings are live, some made in the studio. All are excellent, though inevitably the live recordings are a bit more prone to extraneous noise.

For those who might lament the passing of such a brilliant project, the good news is that Anastasescu is planning a sequel to Invitation to Composers, to take place throughout 2014-2015, subject to securing funding. This will, of course, be of interest to users of this site. I will, therefore, return to this as more information becomes available.

The rest of the month’s releases

Despite the concentration on yuletide frolicking, there are a few other noteworthy releases this month. Chandos has issued new recordings of Karol Szymanowski’s Symphonies No. 2 and 10 with the BBC Symphony Orchestra conducted by Edward Garder. It forms part of their ongoing Polish series that includes, for example, an excellent survey of the music of Witold Lutos³awski. Naxos, as ever, has produced three important additions to its contemporary music catalogue: a programme of chamber and orchestral music by Chinese-born American Lei Lian; a selection of choral music by John McCabe performed by the BBC Singers conducted by David Hill; and, finally, Alla Pavlova’s Symphonies No. 7 and 8 performed by the Lithuanian State Symphony Orchestra under Gintaras Rinkevicius.