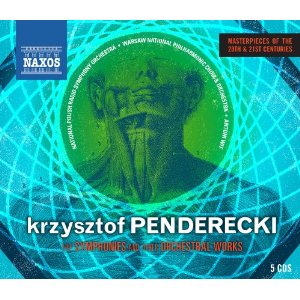 Apart from the excellent Retorica disk reviewed in my last post, there are a number of other new recordings worth checking out this month.

There are five releases on Naxos. The survey of the symphonies of Maxwell Davies under the baton of the composer continues with the issue of his classically proportioned Fourth and the single movement Fifth, played by the orchestras for which the works were originally written: the Scottish Chamber Orchestra and the Philharmonia respectively. In a similar vein, Antoni Wit and the Warsaw Philharmonic and Choir continue their increasingly impressive survey of the music of Penderecki with the release of the boxed set of Symphonies 1-5, 7 and 8 (No. 6, I believe, is still being written) and a disk of choral/orchestral music: Hymne an den heiligen Adalbert, Song of Cherubim, Canticum Canticorum Salomonis, Kosmogonia and Strophen.

In the American Classics series there is a recording of music by Claude Baker conducted by Leonard Slatkin and Hans Vonk with the Saint Louis Symphony Orchestra. The programme consists of The Glass Bead Game, Awakening the Winds, Shadows: 4 Dirges-Nocturnes and The Mystic Trumpeter. I don’t know the composer but, having dipped into the disk on Spotify, I can say that the music is fascinatingly mercurial and atmospheric. Well worth a listen. Atmospheric, but in a different way, would also be a good description of Vivian Fung’s Violin Concerto, Glimpses and Piano Concerto Dreamscapes with the Metropolis Ensemble. Here the effect is an intelligent mix of East meets West via Gamelan and John Cage prepared piano. Finally, there is a new disk of music for wind band that comprises Chen Yi’s Dragon Rhyme, Kurt Weill’s Violin Concerto and Jennifer Higdon’s Soprano Saxophone Concerto. It is worth checking out even if you’re not a fan of the genre, since the composers on the disk admirably exploit the range of which this type of instrumental group is capable.

Apart from Retorica, there are also two exciting new releases on NMC. The first is an all-Knussen programme consisting of Choral, Autumnal, the Whitman Settings, Secret Psalm and Prayer Bell with BCMG and the BBC Symphony Orchestra under the baton of the composer. The disk, sadly, doesn’t seem to be on Spotify, so I’ve been unable to check it out properly. Little tasters are, however, available on the NMC website. The second is a disk of music by Tansy Davies entitled Spine, including the substantial works Iris, Falling Angel and the five movement Loopholes and Lynchpins for piano. Those who familiar with her music will know what to expect – urban but urbane: grungy but sophisticated – for those who don’t, this is a good place to start, even if the disk Troubairitz on Nonclassical might be more immediately accessible. Also on Nonclassical, but this time only just released, is Cello Multitracks, featuring the music of Gabriel Prokofiev played by cellist Peter Gregson. Don’t forget, finally, to check out the 20×12 page on NMC. Now the Olympics are over the project is drawing to an end, but it is perhaps even more compelling now the full range of works can be experienced.