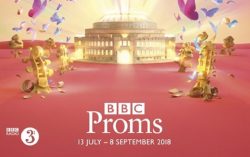 New works seemed a bit thin on the ground at 2017’s BBC Proms, so it is good to see a healthy 19 world premieres this year. The biggest winners are: Anna Meredith, whose Five Telegrams on the first night will tap into the centenary of the end of the First World War and Roxanna Panufnik, whose Song of Darkness and Light will open the last night.

That these two high-profile commission slots are given over to female composers is no coincidence—2018 also marks 100 years since the granting of the vote to women over 30. The anniversary is being celebrated through the promotion of these and other female composers, including Laura Mvula, Bushra El-Turk, Tansy Davies and Lili Boulanger.

Other notable premieres to look out for include, in August, Simon Holt’s Quadriga on 13th; a new Rolf Wallin Violin Concerto on 21st; Iain Bell’s Aurora on 29th and, intriguingly, two small works from Benjamin Britten on 6th. Do also check in for the three premieres on 15th July. These form part of the 40th birthday celebrations of BBC Young Musician of the Year and include the first performance of Sidechaining by C:T’s very own David Bruce.

The Proms will also be contributing to the Bernstein at 100 celebration with performances of West Side Story, On the Town and a tribute to his televised educational work with the event The Sound of an Orchestra. There will also be the chance to hear the first UK performance of his unfinished ballet Conch Town.

Here, then, is the complete list of regional, national and world premieres at this year’s Proms. As in previous years do check back to this list once the festival is in full-swing—clicking on the date should take you directly to any performances you have missed.

25th Tansy Davies, What Did We See? (orchestral suite from ‘Between Worlds’) (world premiere).