A Voice Gone Silent Too Soon: the music of Gerhard Schedl 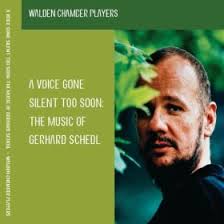 The Boston-based Walden Chamber Players have just released a tribute to Austrian composer Gerhard Schedl. It’s title, A Voice Gone Too Soon, is a reference to his tragic death aged 43: he shot himself in woods near his house in Eppstein after suffering a long period of depression.

The knowledge of Schedl’s end makes experiencing his haunting music all the more poignant. It often moves at slow tempi, with passages of expressive gentleness being juxtaposed with sudden outbursts that feel bitter or sardonic. His music also sings; there is a strong emphasis on achingly melancholic melody. These traits may or may not be related to Schedl’s difficulties in life, it is impossible to say. What is much more certain is that each of the four chamber works on offer here—a duet, two trios and a piano quintet—show exquisite craftsmanship. Schedl’s expert instrumental writing, his judgement of balance and effect, do not falter throughout the programme.

Happily, the searching qualities of the music are married to structural discipline, perhaps reflecting the composer’s Austro-German lineage; he admitted, for example, to be strongly influenced by Bach. Whilst tonality is not, per se, an organising force, there is the use of pivot notes to ground the texture and even to reference, at a level of remove, tonality. This is most apparent at the end of the String Trio where a pitch centre set up at the opening of the work and a surface motive unite in what feels like an echo of a traditional cadence. A Due makes use of similar devices as well as cyclic recurrence of musical material (the opening of the last movement, for example, references the beginning of the work). A Tre is based on a single motive, used throughout. In five movements the shape is less traditional than those used in the other works, though, in some respects, the two Adagio movements, separated by one marked Moderato, feel as if they might have been conceived as one and later separated. In any case the resulting structure is satisfyingly balanced.

Most poignant of all is the final work of the programme A Cinque. It ends with an Adagio of harrowing beauty, a simple descending idea on the piano set alongside ethereal interjections from the clarinet, violin, viola and cello. Eventually the piano figure seems to win over the other instruments and the music draws to an agonising but serene close. It is draining to listen to this and at once to think of the tragedy of Schedl’s end.

The Walden Chamber Players have done us a great service in recording this marvellous music, more so because they are both alive to its every nuance and completely in command of its exacting technical requirements. The recording is clean, immediate and well-balanced. Recommended.

The rest of this month’s releases

Naxos have released a new recording of early Benjamin Britten Chamber music with Matthew Jones on Viola and Violin and Annabel Thwaite on Piano. With the exception of his Lachrymae: Reflections on a Song of Dowland, all were written in the period between 1925 and 1937, three—Two Pieces for Violin and Piano; Etude, for Solo Viola; and Valse in B major (written at the age of just twelve)—being world première recordings. The Maxwell Davies series continues with the composer conducting the Scottish Chamber Orchestra in performances of his Strathclyde Concertos Nos. 7 (for double bass) and 8 (for bassoon) and A Spell for Green Corn, written to celebrate both the composer’s 60th and the SCO’s 21st birthdays. There is a recording of Philip Glass’s Concerto Fantasy for Two Timpanists in a transcription for wind ensemble, paired with the world première recording of Mohammed Fairouz’s Symphony No. 4 In the Shadow of No Towers. The University of Kansas Wind Ensemble under Paul W. Popiel perform both works. Finally on Naxos, and in time for Christmas, is a disc of carols by the ever-popular Bob Chilcott, performed by Commotio under Matthew Berry.

Around the turn of the month, NMC will launch 8 volumes of music garnered from the 2004-2008 Contemporary Voices scheme. You can read about this forthcoming project on their website. More details in a future post. They will also soon release both an audio CD and DVD of Elliott Carter’s 103rd Birthday Concert held in December 2011 in New York City. Preview extracts can be heard here.