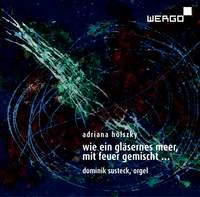 There are some fine recent disks on the German label Wergo. If you are not familiar with their work I urge you to have a rummage around their website, especially as many of their recordings are available on Spotify.

Adriana Hölszky’s disk Wie in gläsernes Meer, mit Feuer gemischt, for example, is a meaty sonic spectacular. It’s astonishing the number of unusual sounds she coaxes out of the organ. As a non-specialist it is not always possible to be sure which extended technique she uses when, though one suspects half-open stops, unmixed mixtures, turning the blower on and off to detune and retune and certainly plenty of deliciously dense clusters.

In Und ich sah wie in gläsernes Meer mit Feuer gemisch, [And I saw what looked like a sea of glass mixed with fire] and Efeu und Lichtfeld  [Ivy and Field of Light] furthermore, she uses percussion ingeniously to colour of the organ line, feeling, as it were, like just another drawn stop. The latter work also features a solo violin. We are told that it and organ ‘appear to exist independently of one another’, but the effect is just as much febrile conversation, with sudden bursts of energy sparking between the two. In the four moment Und wieder Dunkel, the percussion takes on an independent role, lending a brooding intensity of its own.

The musical language everywhere is challenging and it will certainly not be immediately apparent what underlying forces give these works their coherence. That they all unfold with an impressive, near apocalyptic inevitability is, however, undeniable. And the delicious palette of sounds that form the surface means that boredom is an impossibility.

The recorded sound is appropriately ample yet intimate enough to catch the the solo violin with clarity. Performances are superb.