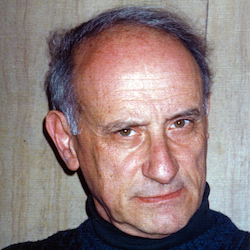 Israeli composer Ami Maayani died on 16th February. He was 83.

Born near Tel-Aviv, Maayani studied conducting, violin and viola playing at the Academy of Music in Jerusalem (1951–53) and composition with Paul Ben-Haim (1956–60). After his military service he trained as an architect in Israel, continuing his studies in Columbia University, New York City, where he also followed Vladimir Ussachevsky’s class in electroacoustic composition. He also took a Masters degree in philosophy at Tel-Aviv University in 1974, the subject of his thesis being Philosophy of Music – Studies in the Aesthetic Writings of Hegel, Schopenhauer, Wagner and Nietzsche.

Despite his career in architecture, he considered himself first and foremost a composer. His music fuses elements of the Western tradition, such as French Impressionist orchestration, with those of Jewish and Arab origin, including sephardic songs, Hebrew Bible Chants and Arab tonal and formal structure. Particularly known for his contribution to harp repertoire, he also wrote an opera, four symphonies, other orchestral music, ballets, song cycles, concertos, chamber, choral and electro-acoustic works.

Amongst his many prizes he was awarded the Engel Prize of the Tel-Aviv municipality (1963), the Ministry of Education Prize (1964), the Casino de Divonne Prize (1967), the Israel Broadcasting Authority Prize (1973), the Israel Composers and Authors Association Prizes (1974, 1977), the Workers’ Union Prize for the Arts (1988) and the Landau prize for the arts for his life works (2001).