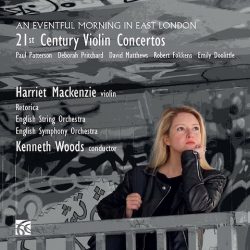 Violinist Harriet Mackenzie and conductor Kenneth Woods have both made appearances on this blog before. Mackenzie is a great champion of contemporary music, both as a solo artist and with duo partner Philippa Mo (who also appears in one work on this disk). They chatted to C:T back in 2014 about their disk of violin duos, featuring music by living English composers. The enthusiasm and deep knowledge of both was palpable, not just in their interview, but also in extensive and lively email correspondence.

The English Symphony Orchestra, now under the baton of Kenneth Woods, have likewise done much to promote contemporary composers, their work going back almost four decades. One of their recent premieres was of Philip Sawyers’ Symphony No. 3. Sawyers explained how the performance became part of a wider project examining the symphony in the 21st century, the ESO commissioning nine new works, including his own. That project is ongoing, so this new disk, An Eventful Morning in East London: 21st Century Violin Concertos is, then, an excellent way of whetting our appetites for pleasures to come.

In a sense the title is a misnomer; only two of the pieces here go by the name of violin concerto, though a third, Paul Patterson’s Allusions for 2 solo violins and strings, might just as well be—its traditional fast-slow-fast shape being the only work that makes use of the traditional concerto shape. The ‘Allusion’ of the title refers, nevertheless, not to the form but to the fact that each movement uses a section of a well-known opera as a starting point: the final fugue of Verdi’s Falstaff in the first movement, the Commendatore Scene from Don Giovanni in the second movement (even if the Bartokian starkness made me think more of Duke Bluebeard’s Castle), and a witty reworking of the overture to Figaro in the third. Typically of Patterson, the music is wide in range—vigorous and entertaining but not eschewing darker territory where necessary.

Deborah Prichard is known for her synaesthetic approach to composition, Wall of Water being no exception. It is a response to Maggi Hambling’s magnificent Walls of Water series of paintings, which she and violinist Mackenzie viewed being made at the artist’s studio in Suffolk. The result is not strictly programmatic, but the work has undoubtedly absorbed something of the elemental character of the visual pieces. It reverses some of the concerto conventions, unfolding impressively from a majestic cadenza that leads to a fast and fluid passage before returning to the stasis of the opening.

David Mathews’ single movement Romanza for solo violin and string orchestra plays elegantly with waltz form. After an expressive opening section we suddenly find ourself tripping along in a world that has the all the urbanity of Strauss without any of the platitudes—the transition back to the opening material near the end, for example, is spine-chilling.

The title of Fokkens’ exhilarating and colourful An Eventful Morning Near East London refers not to the UK, but a ‘cattle-infested stretch of the N2 motorway between East London and Umtata’ in the composer’s native South Africa. It is possible that this was an intentional play on words—Fokkens’ music often reflects the tension of being a South African abroad. It opens in the stratospheric upper regions of the violin, played with extraordinary control by Mackenzie, before outlining a lugubrious procession that leads to a peroration of Sacre–esque energy.

The final piece, Emily Doolittle’s falling still for violin and strings, is informed by her interest in sounds from the natural world— she divides the ensemble so that the strings represent a non-sentient natural process, such as the movement of water or geological phenomena, the soloist a living creature in the form of birdsong. The effectiveness relies on the starkness of the juxtaposition—simple repeating chords vs. the melodic weaving of the soloist. Mackenzie describes it as a kind of ‘modern Lark Ascending’. It can’t quite reach those expressive heights, but it is a beautiful nevertheless.

Apart from what is a deeply satisfying and varied programme of music, it is not possible to conclude without again mentioning the performers. Two of the works here presented would not exist without the collaboration between Mackenzie and the composers. For that and also her flawless musicianship, everywhere in evidence here, we have much to be grateful for. The same extends to this magnificent orchestra under their conductor Kenneth Woods. Many conductors pay lip service to promoting new music, what Woods has memorably described as the programming ‘shit sandwich’—an unpalatable modern work between two stalwarts. His mission is to demonstrate that modern repertoire needs no such support, a fact that this disk proves in spades.