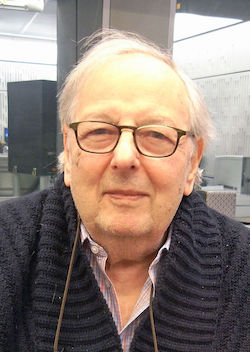 André Previn died last night at his home in Manhattan. He was 89.

Born in Berlin, Germany, Previn showed phenomenal musical talent at an early age. His father, a lawyer, and mother, a teacher, sent him to the Berlin Hochschule für Musik at the age of six, where he studied piano with Rudolf Breithaupt. Of Russian-Jewish origin the family left Germany in 1938, briefly spending time in Paris before moving to Los Angeles.

Previn became a composer through the world of film. As a boy he accompanied silent films on the piano at a local arts cinema and, whilst still at school, he was hired by MGM to arrange and compose film scores. As a film music composer Previn was also required to conduct his own pieces, a skill he honed further in private conducting lessons with Pierre Monteux.

By his early 30s Previn had already built an impressive career as a film composer, garnering Academy Awards for Gigi (1958), Porgy and Bess (1959), Irma la Douce (1963) and My Fair Lady (1964). Ambitious to pursue a career as a conductor, however, he resigned from MGM and in 1967 was appointed music director of the Houston Symphony Orchestra. The following year he became principal conductor of the LSO. It was in London that he established his reputation for the interpretation of composers such as Vaughan Williams, Walton and Britten. If his choice of repertoire did not tend towards the iconoclastic, this was simply a matter of personal temperament. As Previn explained: ‘I am a complete Romantic. I once talked to Pierre Boulez and he was telling me how he’d like to take human performers out of music, to give everything computer-like precision….I go to see a Puccini opera and I’m touched on the deepest level. That would be purgatory for Boulez, but music that only works on an intellectual level bores me.’

Previn’s time in London also coincided with his blossoming as a media personality, most famously in his 1971 appearance on Morecambe and Wise. He also popularised classical repertoire in the BBC’s prime-time Saturday night show André Previn’s Music Night, took part in documentaries about classical and jazz music and even made appearances on the BBC’s panel quiz show Call My Bluff.

In parallel to his life as a conductor Previn continued to work as a pianist and as a composer. He wrote the scores for the musicals Coco (1969), The Good Companions (1974) and incidental music for Every Good Boy Deserves Favour (1977) as well as two operas A Streetcar Named Desire (1997) and Brief Encounter (2007). There was also serious instrumental music, including concertos for solo piano, guitar, cello and violin; orchestral overtures; a wealth of chamber music; solo piano works; and songs and song cycles. Despite resolving not to work in film after he left MGM, he also produced adaptations of other composers’ works for the medium, including for the 1973 production of Jesus Christ Superstar. As a pianist he worked in classical and jazz mediums, favouring trio formations in both. He was also involved in crossover projects with classically trained musicians such as Kiri Te Kanawa and Leontyne Price, or from other musical traditions, such as Ravi Shankar.

Previn never ceased to take the the business of being a musician seriously, famously remarking ‘If I miss a day of practice, I know it. If I miss two days, my manager knows it. If I miss three days, my audience knows it.’ As his much-loved ‘Mr. Preview’ Morecame and Wise sketch so amply exemplified, however, he did not extend this seriousness to himself. This made him a great ambassador, allowing him to connect with people who might not otherwise have been interested in classical music.

As well as four Oscars, Previn was received many Grammy Awards and nominations, including a Lifetime Achievement Award in 2010. He received an honorary KBE in 1996 and in 1998 the Kennedy Honor for lifetime achievement.