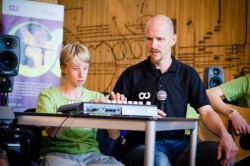 There is something poignant about a world premiere of a composer who is no longer with us. Such is the case with the first performance of Peter Maxwell Davies’s Piano Sonata No. 2, which will be played by Rolf Hind at Wigmore Hall on 27th April. It is testament to Maxwell Davies’s strength that the flow of new works appears to have continued to the end – we also have his new children’s opera The Hogboon to look forward to on 26th June.

On 16th at Bristol Cathedral the University of West of England Singers, Lydbrook Band and members of the South-West Open Youth Orchestra conducted by Ian Holmes will give the first performance of a new version of Liz Lane’s Silver Rose. This is an especially important event since the work has been adapted to allow the participation of the disabled-led South-West Open Youth Orchestra. The instruments for this orchestra are adapted to the needs of individual musicians by the organisation Open Up Music. Not only does this allow much greater participation, but has the potential to open up new creative possibilities for composers. Lane, who is heavily involved in the creation of new repertoire for the orchestra told me recently that, as well as adapting standard instruments, the technical team is working on the development of a new musical instrument for the National Open Youth Orchestra planned for 2018/19. She admits it is ‘early days yet’, but has promised to keep us informed. In the meantime, do take the opportunity to hear the first steps in this excellent initiative.

Dutilleux’s 100th birthday celebrations continue this month with a BBCSO Total Immersion event at the Barbican on 30th April. It begins with an introduction to the composer by musicologist Caroline Potter, followed by a lesser-known work: a screening of the 1952 film L’amour d’une femme, for which Dutilleux provided the soundtrack. At 5pm Guildhall musicians concentrate on the composer’s chamber works, including his seminal string quartet Ainsi la nuit. Another talk by Caroline Potter follows at 6.30pm, acting as an introduction to a concert at 7.30pm with BBCSO consisting of Symphony No.1, Tout un monde lointain, The Shadows of Time and Métaboles.

The Budapest Spring Festival (8th–24th) has a number of events which will be of interest to lovers of new music. On 13th the Budapest Festival Orchestra will play John Adams’ Harmonielehre alongside works by Liszt and Bartók; on the same day there will be performances of new works by Steven Mackey and Uri Caine; the King’s Singers perform works by Morley, Reger, Ligeti, Bartók, Biebl, Kodály and Bob Chilcott on 19th; and on 22nd the will be the premiere of László Dubrovay’s ballet Faust, the Damned as well as Light from the Outside World by crossover DJ Jeff Mills. The Wittener Tage Für Neue Kammermusik (Witten Days for New Chamber Music), meanwhile, runs from 22nd–24th in Witten, Germany. There are a total of 20 world premieres and works first commissioned by Westdeutscher Rundfunk (WDR). The complete programme can be viewed here.

There are four opportunities to hear works by emerging composers. At IRCAM, Paris on 15th composers from the Cursus 1 programme (composition and computer music training) present their new works for solo instrument and electronics. On 24th there are two celebrations of the 400th anniversary of Shakespeare’s death: at Bridgewater Hall, Manchester, five composers will have works performed by the BBC Philharmonic; whilst at Peninsula Arts Plymouth University students will present their new songs alongside works by Clive Jenkins, Roxana Panufnik and Gerald Finzie. On 27th at Hoddinott Hall, Cardiff, finally, the BBCNOW Composition: Wales – Open Workshop presents works by Welsh composers worthy of wider exposure.

Other world premieres to look forward to this month include: in the Tenri Cultural Institute, NYC on 2nd, Scott Wheeler’s Ben Gunn, presented alongside works by Virgil Thomson and Judith Weir; on 3rd in The Coronet Theatre, London a new work by George Lewis for solo guitar and ensemble; also on 3rd Nathan Theodoulou’s Jazz Concerto Grosso; and Franck Krawczyk’s Après receives its first performance by the NWP on 26th at the David Geffen Hall, NYC.

Regional premieres include the first US performances of Invisible Door for harpsichord and violin by Hyo-shin Na in San Francisco on 3rd; and Chaya Czernowin’s Hidden in Boston on 29th. In the UK, meanwhile, there are first performance of works by Hans Abrahamsen: Ten Studies at Wigmore Hall on 27th (in the same concert as the Maxwell Davies world premiere, above) and Concerto for the Left Hand at Birmingham Symphony Hall on 28th.

Some additional concerts, including two world premieres, that I missed in my original roundup. For additional information, see CT’s concert listings: