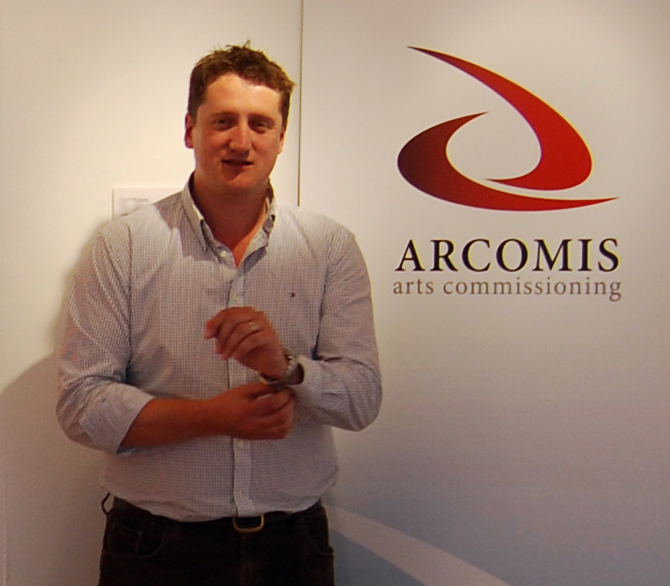 I set it up in 2007 when I’d finished my PhD in composition at Cardiff. The name is derived from Arts Commissioning. Whilst pursuing my doctorate I was lucky to have been commissioned to write eight pieces for a large firm of Chartered Accountants that were performed around the country and then culminated in a concert at Covent Garden. I didn’t know much about corporate commissioning – it felt almost like a dirty word, as if you were selling your soul. But actually it wasn’t like that at all; it was a very positive experience where I got to do artistically exactly what I wanted. Arcomis was essentially set up to replicate that process, whereby with a whole pool of composers we could then go to businesses and offer their services. Perhaps composers aren’t business-like – we want to write music – so I thought Arcomis could go to companies and individuals offering the opportunity to commission works.

How did you go about setting it up?

Setting up a business is a relatively straightforward process: you do it with Companies House in the UK. We also had some initial assistance in the form of a grant from Cardiff Council and Cardiff University. Part of this gave the opportunity to attend business training courses and workshops. At first I thought these sessions would be dreadful, but actually the training was incredibly useful, since it included things like knowing how to write business and strategic marketing plans. A business-like approach is essential to what we do, since I felt really strongly that Arcomis shouldn’t rely on any exterior funding

So in effect it is entirely self-sustained?

Yes, that’s the idea. When we set it up we wanted to keep the direct costs, such as office space, as low as possible. So basically any money that comes in to Arcomis gets reinvested into our core activities. It’s not going to be something anyone makes a huge amount of money out of. The idea is to raise awareness of new music.

What services does it offer to composers? Why do we need to know about it?

Our core aim is to get commissions for composers. There are three key things that Arcomis does. First is the promotion of the commissioning of new music to businesses and to individuals. Obviously, over the last few years, with the financial issues, it’s been very difficult to promote the idea of something new to businesses. But it’s turning now. Second is the idea of an online scores collection, a sort of ‘iTunes for sheet music’. You can upload scores to the site, Arcomis proofreads them for presentation only – there are no stylistic limitations – and then posts them. People can then download and buy print copies. The third part of the business is ‘events’ at which we can perform pieces that have been commissioned and also publicize and raise awareness of new music and the idea of commissioning new music.

Is there a cost involved to the composer in uploading scores?

There is a charge, but submission to the collection is currently free.

So how does Arcomis make money from the scores, and what does the composer receive?

Composers set the download charges for their music, and that is split between the composer and Arcomis. To be successful, the key thing is for composers to set a realistic price for their work. The minimum charge is £1, because of transaction fees Arcomis pays to Google. But what we’re finding is that people download a copy and then often enquire about a printed copy. What composers do is unique, and people like the idea of owning something bespoke and handmade, so we offer this service too.

Tells us a little about your events.

Our first major event was the three-day Arcomis International Flute Event, which was a major undertaking. One reason for doing it was to publicize new music, but also to grow Arcomis, to grow awareness of it. We centred on one instrument – the flute – and had twelve of the best players in Europe – principals of the major orchestras – come along and give concerto performances or solo recitals alongside workshops and masterclasses. The BBC National Orchestra of Wales opened the event and the London Sinfonietta closed it. The key thing was that every concert contained new music.

Were pieces commissioned as part of the festival?

Yes. But Arcomis has not yet got a large commissioning fund, so composers shouldn’t contact us asking to be commissioned. However, we are constantly trying to get commissions for people. The whole point is that the broader the range of composers we have contact with, the more likely we are to be able to match up the right composer with the right commission.

So, in order to get commissions, composers first need to be in your score collection?

Exactly, that’s why we set that up. The scores collection is a way of getting onto our radar.

What about upcoming events?

The Flute Event was our first large-scale event, with people coming from all parts of the world to see it, but we also want to make sure that that we are involved in smaller scale events, which is where  Arcomis Live comes in. These are not necessarily events that we are organizing ourselves, but where we are partnering up with other organizations, so we can help with marketing, spreading the word and possibly be involved in commissioning new music for them. The first was at an art gallery where we commissioned two short pieces, performed ‘after a work of art’. That artist is now working with Arcomis and people can now commission works of art from her as well. Upcoming events include working with the composer Max Charles Davies, who is having a new work premièred at the Tête à Tête Opera Festival, commissioning some new pieces for a jazz group performing at Cardiff Mardi Gras and, later this year and into next, we’ve partnered-up with Elektrostatic new-music festival in Bristol for a series of six concerts.

You work with artists too?

Yes, though music remains our core focus. Our reason for including artists is that people instinctively understand what they are getting when they commission a piece of art. By involving artists we hope to be able to break down the barrier in understanding when it comes to commissioning new music, where a company might not understand exactly what they are getting. They need to understand that when they commission a new work we can arrange a performance or a CD recording; so that there is a product at the end of it that the business or the individual takes away.

How do you see Arcomis developing in the future? What is your dream scenario for the business?

We will continue to adapt in order maintain our focus on our core aim of promoting the commissioning of new music. We’re going to be doing another big international festival in 2013. We’re also looking at providing a management service to composers. Composers want to be writing music, so the idea is that if you have a commission we can deal with collecting the money, deal with the contracts and liase with the commissioner. I also would like Arcomis to bring people together. I dislike the competition that composers have to endure with each other: competitions and the rest of it. You can’t judge art like that. Inevitably within a ‘market’ some composers’ music will be preferred over others, but I would like to see a situation where there are enough potential buyers to make everybody’s product worth something.