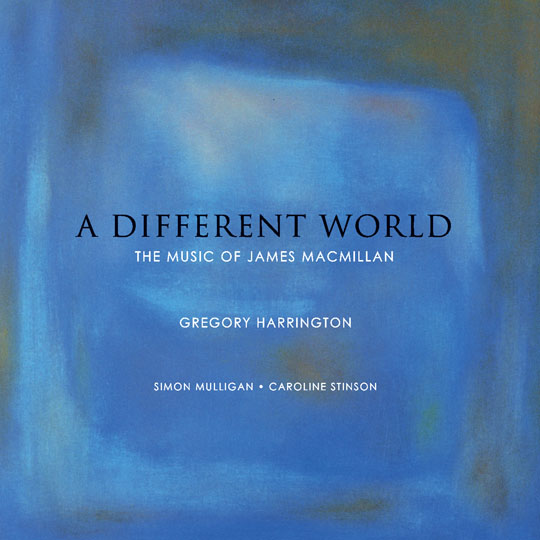 Since writing my review of Biophilia last week, I’ve thought a lot about what makes a good CD release. Not everyone is able to release an app or rely on a huge marketing effort to get them noticed. But if one follows the ‘three Ps’ – programming, performance and production – one can’t go wrong.

A new disk of music by James Macmillan featuring the brilliant young violinist Gregory Harrington and two equally gifted colleagues, pianist Simon Mulligan and cellist Caroline Stinson illustrates what I mean. The programme is organized in a way that subtly draws the listener in and then provides the changes of pace necessary to keep one interested. The opening trio of pieces for violin and piano, Kiss on Wood, After the Tryst and A Different World, whilst certainly not straightforward in their expressive intent, have an approachable harmonic idiom. This prepares the ground for what feels like the centre-piece of the disk: the challenging but superb Fourteen Little Pictures, featuring violin, cello and piano. A change of pace then takes us to a trio of pieces for piano solo. The first two, Walfrid, On His Arrival At the Gates of Paradise and 25th May 1967 (which derives from a set of two pieces by the same name), are both world première recordings and both inspired by football. I was particularly struck by the boyish gusto of the second, a celebration of the day Celtic won the European Cup. It also acts as the perfect palette cleanser for what follows: in anguistis… I,  for solo piano and, the last piece on the disk, in angustis… II, for solo violin (also a world première recording). These last two pieces, written in response to the events of September 11th, form a dark and melancholic close to the programme. The performances from this young group of musicians are consistently first class. Harrington’s playing is marked by its veiled richness in the lower register and incredible control into the sometimes stratospheric higher registers employed by Macmillan. Caroline Stinson only features in Fourteen Little Pieces, but proves very much to be Harrington’s equal, whilst Simon Mulligan provides both sensitive accompaniment and soloistic virtuosity as required. Production too is excellent, with very immediate, warm and well-balanced recording. Talking of production, the disk is available on iTunes, Amazon and CD Baby as downloads. But if, like me, you are a lover of the physical product, it is worth purchasing this handsomely made CD in hard copy. Björk eat your heart out…

A slightly more curious piece of programming can be found on Joanna MacGregor’s new disk of music by Harrison Birtwistle, Hugh Wood and Lou Harrison released on Warner Classics. The disk opens with Birtwistle’s uncompromising Antiphonies for Piano and Orchestra, a work that, with its abrupt interactions between soloist and orchestra, seems to completely tear up the concerto rulebook. I found it intriguing, mysterious but impenetrable. Repeated listening required, I think. More immediately engaging were his virtuosic, and often urbane and witty, Harrison’s Clocks. Though more obviously conceived as one entity (it has recurring material at the beginning of each movement, for example) it reminded me a little of Ligeti’s Piano Etudes, probably because the evocation of clocks also fascinated the Hungarian composer. The third work, Hugh Wood’s Piano Concerto, is jazzily appealing (especially in the third movement), but also quite hard-edged. Which makes the final work in the programme, Lou Harrison’s luscious and tonal Piano Concerto, feel a bit out of place. Which is not to say I didn’t like the piece; on the contrary I found its totally idiosyncratic East meets West style very infectious. Programming issues aside, however, MacGregor performs brilliantly, adapting herself to the wide range of styles on offer and she and Warner are to be congratulated for bringing us these new recordings.

Also worth checking out are three recording that will be released at the end of the month: ASM 35 on Deutsche Grammophon, a selection of mostly older repertoire played by Anne-Sophie Mutter that will, however, also include Lutoslawski’s Partita for Violin and Orchestra; also featuring Sophie Mutter on DG, a new disk with world première recordings of Wolfgang Rihm’s Lichtes Spiel and Dyade, Sebastian Currier’s Time Machines and Krzysztof Penderecki’s Duo Concertante; and a new disk on EMI that includes Schoenberg’s transitional work par excellence, Chamber Symphony No.1, conducted by Simon Rattle.