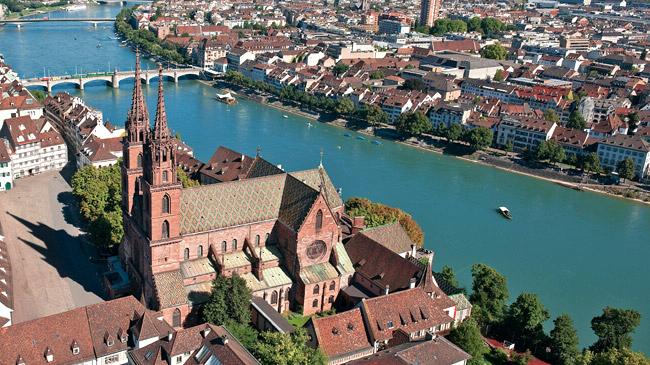 Despite waxing lyrical about the joys of being on the road, the comfort of a Pembrokeshire Christmas almost persuaded me to give up my nomadic lifestyle. I have finally, however, dragged myself away God’s own county and am back in Basel, Switzerland. Not particularly adventurous, perhaps, but the need for change has to be balanced by the need to get on with projects – for now Basel is the best place to continue work on the Dutilleux sketches, which is increasingly looking like it might occupy me for the next ten years.

It’s exciting to be back in a city with a thriving cultural life. On Friday I heard the Basel Sinfonietta play Ligeti’s Hamburgishes Konzert, Manfred Stahnke’sTrace Des Sorciers and Morton Feldman’s Coptic Light at the Musiksaal.

I’d heard the Stahnke in rehearsal the day before, where it had left me pretty unconvinced; there seemed to be little sense of structural cohesion and the players appeared to struggle with the microtonal tuning. It was strange, therefore, to be so won over in the concert. The balance was better in the hall and the many generous ideas did seem to form a larger narrative. A reminder not to rush to judgement.

The Sinfonietta played the Ligeti manfully, in particular Olivier Darbellay coped superbly with the extravagant extremes of tessitura in the solo horn part. The work remains, however, frighteningly difficult to perform. Four natural horns trying to pitch complex chords is a recipe for ensemble problems.

The Feldman presents its own issues, though here this is to do with balance and control in a long, essentially static, span. The Sinfonietta played brilliantly, however, with conductor Michael Wendeberg allowing the work to unfold without fuss. It was a disappointment when the piece ended, so hypnotically had it held me.

Boulez seems to be much on musicians’ lips in Basel. He is, by all accounts, in poor health and may not be able much to take part in his 90th birthday celebrations. One Boulez in Basel story crops up again and again, however, and is worth retelling.

Boulez had a long association with Paul Sacher, the founder of the city’s famous music library, and, until his death in 1999, would stay with him when visiting the city. This no longer being an option, in 2001 Boulez stayed in a local hotel. This was, unfortunately, just after the terrorist attacks in New York.

On seeing his name pop up somewhere on a computer, the local police did a background check on what, to them, was an entirely unknown figure. It had somehow found its way onto a list of possible suspects, perhaps because of some of his famously intemperate remarks about burning down opera houses and destroying all art of the past.

Given the attitude of Muslim extremists to music and other forms of art, as so disgustingly demonstrated by Isis recently, it is perhaps not surprising that the police were somewhat alarmed. Boulez was raided at his hotel, his passport and train ticket seized. After further investigations, and presumably some red faces, the situation was ironed out.

I’m told that the next time he visited Basel the Chief of Police was on hand to welcome him with a large bouquet.