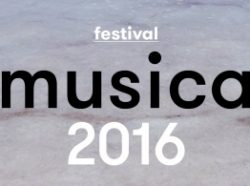 The Proms continue until 10th September, though with just one more world premiere to look forward to: Tom Harrold’s Raze on the Last Night. I am a little behind on my listening, but of the August new works I was particularly struck by Helen Grimes’s characteristically colourful Eardley Pictures. Splendid also to hear the National Youth Orchestra of Scotland do such a good job of the second of these. All the premieres, including links to completed performances, are still viewable, here.

If the prospect of the Proms ending is a depressing thought, it may be worth heading to the Continent, where there are several major festivals to look forward to, including:

Focusing on contemporary music, there is much to enjoy over the festival’s 45 events. Of particular interest to British audiences is a staging of Britten’s War Requiem, to be performed on seven nights during the festival. Its importance in the context of contemporary events and British music will also be discussed. Living composers represented include Bent Sørensen, Jacob Kirkegaard, Manos Tsangaris, La Monte Young, Maja S.K. Ratkje, Trond Reinholdtsen and Terry Riley (who will also perform).

More a season of arts events than a festival, so perhaps of more interest if you live in Paris. Two concerts stand out in September: a ‘posthumous’ opera by Robert Ashley on 21st and 24th, and an opportunity to hear George Benjamin’s Dream of the Song… on 28th and 29th.

Despite the focus on Beethoven there is some more recent music to enjoy, including works by Ligeti, Bartok, Rihm, Nono and Malipiero. There is also a recreation of Dance, Philip Glass’s 1979 collaboration with choreographer Lucinda Childs and conceptual artist Sol LeWitt.

Another festival that focuses entirely on contemporary music. This year the focus is on the stage, both literally, in terms of form, and metaphorically, as a compositional paradigm. Opera events include The Magic Fountain by Paweł Mykietyn; the multimedia opera Aaron S by Sławomir Wojciechowski; Olga Neuwirth’s Lost Highway; and two works by Salvatore Sciarrino: Infinito Nero and Luci mie traditrici.

Also a contemporary music festival with a huge amount on offer: an exploration of electronic music that pays homage to one of its founding fathers, Pierre Henry; several screenings of cinematic works accompanied by live performances of their original scores (in the case of Kubrick’s 2001) or by new or improvised works (for Métropolis by Fritz Lang and Les Misérables, by Henri Fescourt); four concerts for choir and orchestra; Mririda, a new opera by Ahmed Essyad; a dance spectacle My Rock by Jean-Claude Gallotta; a focus on music by Spanish composer Alberto Posadas; and the promotion of works by emerging composers.

Back in the UK, you could check out the Lammermuir Festival in East Lothian (9th–18th). There’s Britten’s perennially popular Noye’s Fludde on 11th, Rolf Riehm’ s He, très doulz roussignol joly on 15th and a programme that includes Berio, Sørensen and Gubaidulina on 16th. In London, there are premieres from Stephen McNeff, Roland Pöntinen, Julian Philips and Anna Meredith at Wigmore Hall on 12th, 19th, 20th and 24threspectively. There is also a collaborative performance between Gwyneth Herbert and the London Sinfonietta, including new arrangements and pieces, on 9th at Kings Place. Wim Henderickx’s new choral work Blossomings, finally, receives its first performance on 23rd at the Barbican. The rest of the programme is chiefly dedicated to the vocal music of Jonathan Harvey.