Beyond the River God 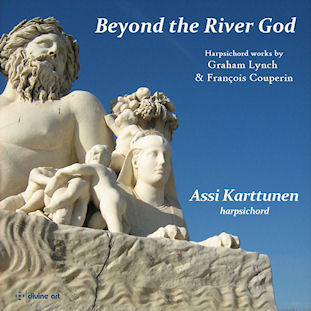 Alex Ross describes Graham Lynch’s style as puzzling ‘over the classic distinction between ‘tonal’ and ‘atonal’, writing in praise of the neither-here-nor-there.’ It’s a pretty good analysis, though in the context of the works on this disk it, perhaps, underplays the extent to which the music is made up of recognisable (and therefore accessible) tonal elements. I’d also be coy about using the word ‘atonal’. Whilst often correct in the sense of being ‘not tonal’,  the surface of the works abound with generous and attractive melodic writing and, even when the harmony is nicely unpredictable, the extensive use of pivot pitches always keeps the music centred.

Beyond the River God, for example, presents three tonally derived ideas at the outset: a spread extended chord, a lovely melody and rocking homophonic chords. They appear throughout, sometimes obviously in a cyclical sense, sometimes appearing to lurk under the surface directing harmonic traffic. Ay! is tonal (though always interestingly so), being made up of flowing arpeggios that are given point and poise by the gradually emerging tango rhythms beneath. Admiring York Waterfall and Present-Past-Future-Present are more stark, with In Peterna lying somewhere in between.

Structural matters are handled with admirable lucidity. The shape of Beyond the River God derives from Lynch’s use of the rondeau/couplet idea associated with the seventeenth century school of French clavecinists, most notably, François Couperin (five of whose works appear on the disk). In Admiring Yoro Waterfall the opening group of material, notably a two note whole tone figure, features several times, then gives way to a more obviously pictorial representation of the waterfall before returning at the end, all occurring over a carefully worked out pitch ground plan. The Six Strings from In Petenera elucidates a repeated phrygian idea based round a single pitch. Present-Past-Future-Present opens with a thoroughly explored ‘walking’ idea that reappears in the final movement. All the works also have a strong feeling of cadence, often underlined by a moment of silence before the launching of a new phrase, making the musical shapes easy to follow. Only in Sound Sketches did I feel that the musical argument was, perhaps, a little too pared down, neither the simple ground plan or arpeggiated surface providing enough interest. It is, anyway, only a very small piece at the end of the disk.

The pitfalls of a generous (nearly 80 minute) programme of music on a instrument with limited means of dynamic and timbral variation are obvious enough. In some ways, interpolating the music of Couperin with that of Lynch was a necessary practicality; the disc contains all of Lynch’s harpsichord music to date which, by itself, would not have been enough to fill the disk. It also, however, provides a happy solution to the ‘lack of contrast’ issue – the ear is never tired by one style or the other. Also, I have to say, the quality of Lynch’s writing is very much a match for that of his illustrious predecessor. Not that it’s a matter of competition, since the two styles sit very comfortably together: though, Beyond the River God excluded, Lynch seems to want to avoid drawing comparisons between his style and that of his antecedents, in its lucidity, fecundity and understanding of the medium there are definite parallels.

I’m not in a position to judge the authenticity of the ornamental minefield of the Couperin except to say that the performances strike me as stylish and assured. In the Lynch Karttunen plays with verve, commitment and a total grasp of the structural issues at play. A highly rewarding disk.