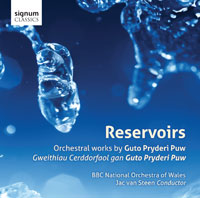 ‘There are places in Wales I don’t go:
Reservoirs that are the subconscious
Of a people, troubled far down
With gravestones, chapels, villages even…’

Guto Puw is in many respects the quintessential Welsh composer: he grew up in a musical family steeped in national folk forms and traditions, he is a native speaker who now teaches at Bangor – the only university where it is possible to earn a degree through the medium of Welsh, he rose to prominence through the Eisteddfod tradition and, most importantly, his music is steeped in the folklore of the country.

Whilst extra-musical influences frequently derive from his rootedness, however, his style – highly chromatic, driven, brash even – sometimes feels like a challenge to the culture that gives it succour. Despite the efforts of an earlier generation of composers, Welsh music still suffers from a tradition of amateurism often ignorant of radical developments elsewhere. Puw’s roots might be Welsh, but his outlook is international, with influences including Lutosławski, Per Nørgård and György Ligeti.

His new disc of five orchestral works, Reservoirs, released this month on Signum Classics amply demonstrates these two sides to Puw’s musical character. The first piece in the programme …onyt agoraf y drws…, (…Unless I Open the Door…) is based upon the end of the Branwen tale from the Mabinogion that, with its opening of forbidden doors, evokes something of Duke Bluebeard’s Castle. The musical surface includes ‘found’ musical elements, including a Welsh folk tune and an Irish string reel. There is not a hint of parochialism in this, however; their integration into his wider style being knowingly postmodern. The piece also displays a fine instinct for drama, suggesting, perhaps, a nascent operatic talent; Puw’s forthcoming project, the opera Y Tŵr (The Tower), with Music Theatre Wales is an exciting prospect.

The most substantial work on the disc, Reservoirs, is inspired by the R.S. Thomas poem of the same name, the opening lines of which begin this review. The poem refers to the flooding of various valleys in North Wales in order to supply water to English cities, a subject of particular resonance to Puw, whose grandfather lost some of his own land at this time.  Puw approaches the subject from several angles: the serenity of the musical surface in slow sections is contrasted with violent passages representing the tragedy that occurred beneath; the notion of water being held in one place represented by the accumulation of clusters of sound. It is an intensely serious piece, the musical language more consistent than …onyt agoraf y drws…

Concerto for Oboe and Hologram stand apart from the other works on the disk, not being inspired by any aspect of national consciousness. They are, nevertheless, also programmatic. In the Concerto each movement is based upon a characteristic of language: in Rumour, the oboe weaves a line of beguilingly attractiveness that eventually melts away, the parallels with the title being obvious enough; Chatter hammers away with mechanistic zeal, building into an exhilaratingly brassy climax.; Lento tenerezza explores tenderer aspects of language, though perhaps in a way that acknowledges that sympathetic words are not always delivered with sincerity; S… s… s… stutter, evokes this particular malady with deliciously humorous effect.

The ten-minute purely orchestral work Hologram, by contrast, takes a rather more serious approach to his source of inspiration, the techniques of holography being translated into a musical argument involving ‘gradual and subtle changes of colour and texture’. It is an idea that pays off, Puw handling the ten-minute span with an acute ear for orchestral sonorities.

The programme ends with his Break the Stone Overture, written for the 125th Anniversary of Bangor University. The title makes reference to the people of the area, many of whom were quarrymen who contributed their wages to the founding of the University. Puw transforms the idea of working stone into a purely musical one, the musical raw material being subjected to constant development. It is an exhilarating span of music, the semiquaver figure first presented in violas building with relentless energy. It leads into an atmospheric central section with Ligetian running scales, a distant trumpet call and various unusual percussion instruments – including ‘a masonry hammer and chisel, a roofing slate and shell chimes’ – that evoke the sound of the quarry. The opening section eventually reasserts itself, the piece ending in a satisfying blaze of energy.

Jac van Steen and the BBC National Orchestra of Wales perform with vigour, precision and understanding throughout. The recording is well-balanced and clean. All of which is superfluous – you are not going to find these recordings anywhere else. If you want to get to know the music of this fine Welsh composer, this is the place to start.

Another Welshman whose music is worth getting to know is Brian Noyes. Journeys After is a substantial new release containing his orchestral works Points of Decision and Shadows of Memory, played by the Moravian Philharmonic and St. Petersburg State Philharmonic respectively.

DG have released a trio of albums by Max Richter: Infra, 24 Postcards in full colour and Songs from before. They also debut a new recording of motets by Karl Jenkins. NMC, meanwhile, have issued Harrison Birtwistle’s Gawain –  a re-release, I believe, of the original recording; and also Just stuff people do, a programme of works by Larry Goves.