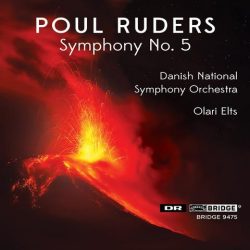 Actually released way back in September, I only came across this today and was attracted by its grungy back-to-basics approach. To see what I mean you can read a very thoughtful review of the disk, here. Or better still, have a listen.

The first recording of the composer’s latest symphony, performed by the Danish National Symphony Orchestra. The music is energetic and pretty accessible, especially in the frentic dance-inspired final movement.

A cantata to mark the centenary of the First World War with choral performances from tenor Nicky Spence, the Oxford Bach Choir and Portsmouth Grammar School Chamber Choir. The work is paired with An Airmail Letter from Mozart, directed from the piano by Melvyn Tan.

The survey of Wernick’s music continues with performances of his Concerto for Cello and Ten Players, Piano Trio No. 1 and Sextet. Music of brittle beauty, worth investigation.

Four composers, two Mexican and two from the U.S. set a libretto by Jorge Volpi. Distinct voices but a satisfying whole.

Vyacheslav Artyomov: ON THE THRESHOLD OF A BRIGHT WORLD, dda 25143 (Spotify, Apple Music)

Artyomov’s Symphony On the Threshold of a Bright World and Ave Atque Vale for percussion and orchestra are both works of brooding power. The final work, Ave, Crux Alba is rather surprising…

Orchestral works from the BBC National Orchestra of Wales’s former Composer in Residence. There’s a nice review of the disk, here.

Subtleties of harmony from a composer who, dissatisfied with equal temperament, has divided the octave into as many as 72 microintervals. There are four pieces: ¿Adónde? Wohin? for violin, soprano and instruments; Oh Bosques|Oh Wälder for soprano, choir and orchestra; ¿Por qué? Warum? for choir in two groups a cappella; and Oh Cristallina… for three groups of vocalists and instruments.

A violin concerto and a suite for large orchestra and electronics from German composer Rolf Riehm. Dense and intensely serious music.