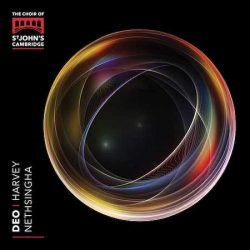 If Jonathan Harvey was always considered to be a modernist, he was certainly one of the most generous-spirited of their number. Many of his works grow out of familiar materials or techniques and he was entirely willing to moderate his style when he saw the need. These qualities are much in evidence in this fine new disk of his church music.

The programme takes a sensibly chronological approach, beginning with I Love the Lord (1977) and ending with The Annunciation (2011). There are also two works for organ: Toccata (1980) for organ and tape and Laus Deo (1969—the only work that does not appear in chronological order).

I Love the Lord draws the listener perfectly into the sound world of Harvey and the English choral tradition with which he was so familiar. It begins with what feels like a simple piece of psalmody; we could almost be listening to the studied exchanges between decani and cantoris at a Sunday morning Eucharist. Harvey quickly subverts this however, as one part of the choir remains tonally rooted and the other is allowed to drift further and further away. The effect is surprising and captivating.

The Evening Canticles that follow are, to my mind, the highlight of the disk, an overwhelming experience and quite simply, one of the boldest and most exciting settings of this text you are likely to hear. In their liturgically substantial 13-minute span Harvey drives his choral forces well beyond the limits of what you would normally expect to hear in an English cathedral. The Magnificat, especially, is not only full of difficult harmonies, angular lines and testing tessituras, there are all also manner of extended vocal effects: ‘whispering, glissandi, aleatoric writing, shouting, pitched speech, percussive effects using repeated consonants.’  The Nunc Dimittis, is more reserved, containing, as Harvey himself described, ‘an extremely human image of an old man nearing death,’ represented musically by a bass solo. Its conclusion (before the doxology), consists of a sublime representation of his final moments as, at the words ‘To be a light to lighten the Gentiles,’ he is gradually surrounded by a rapturous vocal halo.

The Toccata for organ and tape is a reminder of Harvey’s interest in electronic music, not so much as an expressive medium in and of itself, but as a means of extending the expressive possibilities of existing instruments. Come Holy Ghost (1984) and Praise Ye the Lord (1990), provide polar opposites in mood. Come Holy Ghost, for unaccompanied choir, is one of Harvey’s best known works, a sumptuously pictorial set of variations on the plainsong melody Veni Creator Spiritus. Praise Ye the Lord, by contrast, is, as the text suggests, more celebratory. The vocal writing is rather more conventional, though the organ provides a deliciously dissonant Messiaen-esque counterpoint.

This leads to the more substantial Missa Brevis (1995). It contains the typical four movements associated with an Anglican mass setting (i.e. no Credo). The Kyrie is appropriately penitential, with a densely-woven chromatic texture on the words ‘Kyrie Eleison’ contrasted with declamatory statements of ‘Christe Eleison’. The tension between the two is finally, and movingly, mediated by a solo treble. The Gloria, with its much longer text, is also the most ‘telescoped’  but avoids feeling perfunctory by effectively reflecting the tripartite shape of the text: the exhilarating outer sections being contrasted with a penitential middle. There then follows an intensely pictorial Sanctus and an Agnus Dei that draws the whole together by recalling material from the opening Kyrie. The relative brevity of each movement and the more reserved treatment of the vocal forces makes one feel that Harvey had an ear more on liturgical usefulness here than in the Evening Canticles. The result is not so bold, but it is, nevertheless, immensely satisfying.

The Royal Banners Forward Go (2004) for unaccompanied choir takes the form of a procession whose quasi-canonical entries build and then recede. Whilst the shape is, therefore, relatively conventional, there is also a strangeness to this ghostly cortège—the harmonies are empty, the melodies do not always unfold in the way one expects and the final recession leaves a solo treble lingering like a spectre over the proceedings. The organ work that follows, Laus Deo, has a similarly lucid structure. It abruptly contrasts devastating passages on full organ with material that is almost inaudible, the latter seeming, for a moment, to subdue the former. Perhaps the most remarkable thing about this work, however, is that it was written in the space of twelve hours after Harvey dreamed its main material. The speed of composition is reflected in the ecstatic nature of the thematic material. In the quality of writing – which is unimpeachable — it is not.

The final work, The Annunciation (2011), is the most musically straightforward of all the pieces on the disk. Even here, however, the tonal idiom contains twists and surprises that mark it out as more than merely conventional. The simple beauty of the writing is also rendered more moving by the fact that it was written at a time when Harvey was struggling with the final stages of Motor Neurone Disease. Andrew Nethsingha, who conducted the first performance with the choir of St. John’s, describes how he would call the composer after emailing him a recording of the latest rehearsal: ‘Harvey explained how he could no longer hold a pencil or play the piano.’ Just four more works followed the The Annunciation, with Harvey dying in 2012. Nethsingha and the St. John’s College Choir sang this piece at his memorial service.

It is, of course, fitting that the choir of St. John’s, where Harvey himself was an undergraduate, should produce a disk of his choral music. What we have here, though, is more than merely appropriate. It is the marriage of sublime music, insider’s knowledge of how it should be interpreted and the technical nous to pull off that interpretation. On the first of those three, few would disagree. On the second I would point to the illuminating sleeve notes, which are so full of technical understanding, personal insight and anecdote— Nethsingha knew Harvey and certainly knows his music. On the third, Nethsingha shows that he can convert this knowledge into fine interpretation. Everything is well-paced and there are imaginative risks (the frequent use spacial separation, for example) that pay off handsomely. Finally, of course, one must pay tribute to this fine choir. They sing with astonishing maturity and technical assurance in this difficult repertoire. I grew up on a diet of John’s recordings under George Guest and still treasure many of his interpretations. It is clear that that tradition is in safe hands.