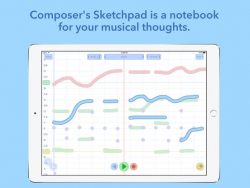 This iOS app from independent developer Alexei Baboulevitch won a Children’s Technology Review award, which suggests that it might not be much use for creative professionals. That would be wrong.

The app takes an entirely graphic approach to composition. You are presented with a canvas with pitch on the vertical axis, time on the horizontal. Once you’ve chosen an instrument you press record and draw (with finger or Apple Pencil) in realtime or, if you prefer, you can enter a line note by note. You can zoom in and out, edit and assign a variety of instruments to different layers within a score. And that’s about it.

The most obvious use case for such an app would be within a classroom or by someone not versed in staff notation. I would argue, however, that trying to use it to write traditional (especially tonal) music would not be the best use case since, actually, one still has to have a knowledge of musical grammar. The application doesn’t much help with this, giving you the whole gamut of 12 notes to choose from— finding the right notes would be pretty tricky for a beginner. But as a tool for creating imaginative sound collages and the like it has immense potential. And this doesn’t just apply to educational users, but to much more experienced composers too.

The greatest achievement of this app is that it frees you from the tyranny of both barline and chromatic scale. Any kind of microtonal nuance is easy to achieve. The best way to think of it would be like directly composing a graphic score, such as those produced in the 50s and 60s by the likes of Ligeti, Stockhausen and Xenakis. Unlike, say, in Ligeti’s Artikulation, however, where the score is merely a graphic representation of hours of painstaking work to produce an electronic composition, here sound and symbol are directly linked, but have (or have the potential to have) the same flexibility offered by electronic manipulation.

If the app is to become really useful for professional composers it could do with expanding its feature set. There are several export option (AAC, MIDI, JSON and ZIP archive) though no import options. It is the latter that would make this a really powerful tool. It would be brilliant, for example, to be able to import and write with user generated sounds or to be able to import a conventional audio track, and then paint round it with this application. The editing tools too could do with enlarging. There is no copy and paste and it would be good to be able to edit the shape and position of individual notes.

Despite this it’s still possible to do real creative work with Composer’s Sketchpad. It’s power lies in the simplicity of its conception and perfect use of finger or stylus input. If you want to give it a try you can download the lite version for free, the full version costs just £3.99.