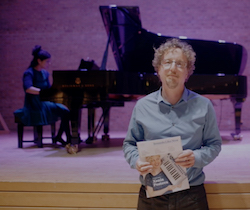 Christian Morris talks to Dan Goren, composer and founder of Composers Edition, about his project to launch a new contemporary music magazine in the United Kingdom & Ireland.

You are currently crowdfunding a new project. What is it and how are you going about it?

It is live now on Crowdfunder, at http://www.crowdfunder.co.uk/sounds-like-now. Basically we’re crowdfunding the launch of a brand new magazine, titled Sounds Like Now. It’ll be devoted to contemporary classical music.

Given the broad range of magazines and periodicals on offer today, where do you see this sitting in the market. Who’s it for?

It fills a gap that I see in the cultural landscape as far as publications are concerned. We have magazines for straight classical, early music, cathedral music, piano music. But we don’t have anything that’s about contemporary classical music in its own right. Within the UK and Ireland there is an extraordinary range of creative musicians and composers engaged in creating new music and as contemporary artists they have something to say about contemporary life. I want to create a focal point, a place where this culture can be explored and celebrated by those who are already engaged in it. Also, crucially, I want to open it up to a wider audience who I think are out there by giving them a bit more information, because it is quite a closed thing in my experience.

And information about contemporary music is surprisingly difficult to come by. Would you agree with that?

Yeah, it’s quite fragmented. There is no one very well-edited space where you can find out what’s going on in contemporary classical music in the UK, which is sort of strange really because there’re lots of people doing it.

With surprisingly large audiences for it…

Ok. It’s the kind of content that you might expect in this type of magazine. There will be profiles of key performers and composers. It’s important to me that we do put more of a focus on performers and not just composers because obviously they’re the people that take the culture to the public. There will be essays and reports from artists—we want to hear from people about what they’re doing and thinking. And we want to hear artists talking in depth about what they do, so it’s not a dumbing-down exercise. We will offer guides to current trends in contemporary music so that people can have things to talk about. A lot of the terms that get coined come from journalists and so on and that helps signpost culture. I think we need a bit more signposting. There will be concert reviews. It’s important for people to talk about performances after premieres. We will also have a listing so people can see where contemporary music is on across the country and to do that properly so that it is comprehensive. We will talk about performances not in a contemporary music setting—it’s important to de-ghettoise. We also want to celebrate performers who might not be foremost known as contemporary music performers, which is another way of opening up the culture. If you have Nicola Benedetti playing a Macmillan premiere then let’s celebrate that so that we’re giving kudos to those performers doing contemporary music.

And it is surprising the number of performers known for other things. I was amazed to find that the late Christopher Hogwood was a great supporter of contemporary music. There’s a lot of this about and it’s not widely known.

Yes! And if we’re going to open it up we’re going to need to include those people because they help to bring it out to a wider audience and actually show that it’s not a ghetto, that there are people doing new music all over the place.

It will be a bi-monthly print and digital publication. So it will be a regular magazine by subscription and, if all goes well, in time on the high street too. Why not? Providing we prove the case for it, we’ll be looking at wider distribution.

And in terms of proving the case, how is this going so far?

Talking within the contemporary music sector, there’s certainly a thirst for it amongst both the artists and the business people: the record labels, the publishers and so on. One of the aims of the crowdfund is to prove the case that there is an audience who are interested in having the magazine. It will, in effect, be offering a subscription, the opportunity for people to make a commitment and to show their support through the usual extras in crowdfunding. But proving that case is important; you have to take that back to industry and it’s important too for the finance.

When can we look forward to this new magazine?

The plan is to launch with the December/January issue in November 2016.

Once I start something there’s no point hanging about! The crowdfund will run for a few weeks and, providing it runs as planned, we can then take it out for the financing and bring in the advertising over the summer. Then we start on the first issue at the end of the summer. And we already have an editor. I think you probably know Steph Power. I talked to quite a few people—journalists and so on—and Steph totally gets it. She’s very positive, she’s very smart. And experienced too. A proper ‘new music head’ with a contemporary career that started back in the 80s performing with Jane’s Minstrels. So, great to have someone like that on board. We’re going to head it together actually, the crowdfund and so on. More of a team!

So, to be clear, you would urge people to visit this page to support this and to make it a reality.

Absolutely! The crowdfund is about people showing their support for this because it simply won’t get off the ground unless we show that there is the interest, the thirst for it. So the message is: come and give it a thumbs-up!

And to put this project in context of the other things you do, this joins a suite of other endeavours, such as Composers Edition and the Institute of Composing.

The picture’s always evolving, always growing. The reason for the magazine came out of working on Composers Edition, thinking more broadly about the marketplace for contemporary classical music. I would like to point out, though, that it will be independent of Composers Edition. It’s there as much for any other publisher or producer. It must be independent, that’s really important, which why I’ve brought in an outside editor. But yes, it’s part of that portfolio of things I do.

And Composers’ Edition goes from strength to strength. You have an impressive range of established composers, such as Michael Finnissy, Sam Hayden and Alastair Greig as well as next-generation figures, such as Charlotte Bray and Jack White. Would you say that the success of Composers Edition was because you were more selective than other online publication efforts?

And you also have the Institute of Composing, with its online journal. Presumably with a more professional focus?

The Institute’s Journal is more a place for discussion within the contemporary music sphere. It’s a place where artists and composers can talk to each other about the issues and their ideas. So that’s quite a specific remit. And it works alongside Club Inégales performances and discussion and artist development programmes.

Is Club Inégales partly also your own take on other similarly fresh approaches we’ve seen to new music, such as Nonclassical or Yellow Lounge?

The club is very much based around Peter Wiegold and his philosophy of bringing together people of different musical backgrounds, being not so much a fusion but a meeting of different cultures. And reflective of, again, people’s wider experience of wanting to hear different cultural voices. It provides that and I think it does it very well.

Such an outcome, for example, being the forthcoming Purcell King Arthur with a contemporary twist.

Yes. In that case it’s about contemporary musical artists looking at an older music and reinterpreting it, reforming it with a contemporary face, which is exciting.

How do you find time, with all these many things going on, for your own composing?

Yes, that’s right. I’ve been with the Oxford Improvisers for quite a few years. I did a PhD with Paul Whitty at Oxford Brookes and that took me into more open forms. I then moved more into improvisation with a focus on group improvisation, both as an individual player within that and also though direction. That’s where my real interest and passion is at the moment.

So you come to it as player, composer and improviser, in no particular order?

Yes, as a musician. I suppose at first I came to it as a composer and I felt a certain conflict between the practices of composing and improvising. It’s that balance between what you do note by note, what happens in the piece or whole performance and how you negotiate that live with people that is really, really fascinating. It’s a real adventure.