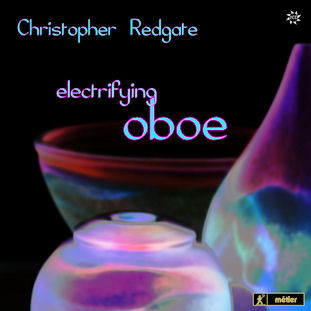 Electrifying Oboe on Métier is a disc of experimental works for oboe (and sister instruments) by Roger Redgate, David Gorton, Christopher Fox, Edwin Roxburgh, Michael Young and Matthew Wright. Collaboration is very much the order of the day in all of these pieces bar one, with many options being left open to the performer and even to the accompanying group of turntable, laptop and electronics. The works are likely to be a shock to anyone with preconceived ideas about the instrument – just about every kind of extended technique is explored, the wacky accompaniments adding to the novelty.  The result, however, is highly engaging, though not, perhaps, quite as ‘new’ sounding as billed; the sound world is often reminiscent of Stockhausen or Ligeti’s electronic music of the late 50s.

Métier has an on going mission to record the works of English composer Michael Finnissy. Their latest disc is a rather novel addition to this project. Before revisions to ‘Peer Gynt’ that he made for performances in 1892, Grieg sketched 250 bars of a Piano Quintet. He never completed it. In 2007 Finnissy decided to elaborate the unfinished sketch into a one movement Kammersymphonie, sticking entirely within Grieg’s stylistic parameters. To what extent Finnissy has mimicked the Norwegian master is for others more expert than me to say. In a sense, however, this isn’t the point: the result is music of ravishing beauty and, like Anthony Payne’s completion of Elgar’s Symphony No. 3 or Deryck Cooke’s of Symphony No. 10 by Mahler, it stands on its own. Of greater interest, perhaps, to Finnissy aficionados will be the second work on the disk, in which he decided again to take the Quintet as his starting point, this time elaborating it in a much freer manner. The result is a fascinating and highly rewarding meeting of minds, the Grieg gradually and gracefully giving way to Finnissy’s contemporary idiom.

The rest of this month’s releases

Signum classics marks the untimely death of John Taverner with a two disc recording of the concert version of The Veil of the Temple performed by James Vivian, Patricia Rozario, The English Chamber Orchestra, The Holst Singers and The Temple Church Choir. Richard Causton’s meditation on the turn of the last century Millennium Scenes performed by BCMG and the Hallé receives its first recording on NMC. There are a clutch of new albums on Naxos: Van der Roost’s Sinfonia Hungaria and From Ancient Times; Maxwell Davies’sStrathclyde Concertos Nos. 9 and 10; Lyell Cresswell’s Landscapes of the Soul, Piano Concerto and Concerto for Orchestra and String Quartet; David Rupert Coleman’s Starry Night and other works; and Peter Boyer’sSymphony No.1, Silver Fanfare, Festivities, Three Olympians and Celebration Overture. There is also a new recording of Arvo Pärt’s Spiegel im Spiegel in the version for piano and violin. On Dutton Vocalion, finally, is a disc of music by Alan Bush that contains his Second Symphony and world première recordings of his Africa Piano Concerto and Fantasia on Soviet Themes; and, also world première recordings, David Mathhews’ Symphony No. 7 and Vespers.