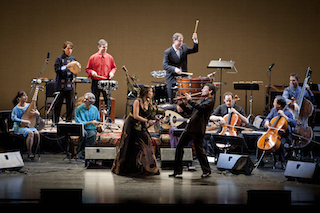 UK premières begin next month with a new work by Ben Comeau, winner of the Cambridge University Composers’ Workshop, which will be playedby the Britten Sinfonia at Wigmore Hall on 4th. Gerald Barry’s song Crossing the Bar, will receive its first performance at the same venue on 24th. A small work, perhaps, but part of an intriguing programme: a selection of 17 songs for soprano and small ensemble commissioned over a ten year period by John Woolrich and BCMG Artist-in-Association Mary Wiegold. The programme reads practically like a who’s who of contemporary music, including, as it does, such figures as: Harvey, Babbit, Adès, Birtwistle, Ruders and Sciarrino. That programme will be repeated at the CBSO Centre on 27th.

Mica Levi, also known by her stage name Micachu, also has an, as yet, untitled work to be premièred by the London Sinfonietta on 27 February as part of their ‘Spectrum of Sound’ concert, which will explore the advances in sonic manipulation over recent years, tracing a path from the pioneers of the 20th century to spectral music of the 21st. The concert also contains the UK première of Georg Friedrich Haas’s Open spaces for 12 string instruments and 2 percussion as well as works by Xenakis and Vivier.

The London Sinfonietta are joined by the BBC Singers on 12th February for a programme of vocal music by James Macmillan, which includes the UK première of Górecki’s Church Songs and MacMillan’s Alleluia. At City Halls, Glasgow, meanwhile, the BBC SSO will, on 28th, give the UK premières of Manfred Trojahn’s Herbstmusik/Sinfonischer Satz and Vito Žuraj’s Hawk-eye (horn concerto). The concert will also mark Boulez’s 90th birthday with a performance of his …explosante-fixe…, appropriately so, since the work received its UK première on Scottish soil more than 20 years ago. The concert will be recorded for Radio 3’s Hear and Now programme, so there will be the chance to hear the programme even if you can’t make it to the venue.

At the Miller Theatre at Columbia University, NYC on 5th February is the world première of Missy Mazzoli’s Quartet for Queen Mab as part of a portrait concert that includes works for strings, voice and electronics. Also at the Miller Theatre on February 19th is a portrait concert of Italian composer Stefano Gervasoni, containing his works: Sviete tihi, Six lettres à l’obscurité (und zwei Nachrichten) and In dir. At SubCulture the NY Philharmonic Contact! series explores new music from Israel on 9th February, including the New York Première of Avner Dorman’s Jerusalem Mix.

The Silk Road Ensemble, which explores the cultural traditions of the famous trade route from which it takes it name, will give a number of concerts in NYC, starting with a meet the ensemble session on February 18th at the David Rubinstein Atrium. The ensemble has commissioned many new works over its fifteen year existence, so there is sure to be much of interest.