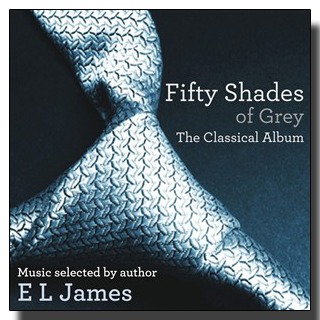 I noticed with a sense of both amusement and nausea yesterday that EMI, a label that I used to follow avidly, has stooped to releasing Fifty Shades of Grey, The Classical Album. The webpage, to which I’m not going to put a link – why promote this nonsense – contains a preamble from the author saying how ‘thrilled’ she is about it (I wonder what her cut is?) followed by some nonsensical spiel about the album ‘setting a mysterious and alluring atmosphere with just a hint of danger.’

I suppose it is easy for musicians to sneer at this sort of thing. Many of us had a eureka moment when we realised that classical music moved us just as much as, if not more than, popular music. Mine came when a friend of the family bought me Dvorak’s New World Symphony when I was seven or eight. Perhaps it is possible that someone will have a similar kind of road to Damascus experience when listening to this CD.

The most popular forms of classical music have long been taken advantage of by the marketing people. I noticed the other night, for example, Tchaikovsky’s Waltz of the Flowers being used on the channel Dave to advertise their Redbull X Fighters. It was quite droll and made me smile. The same might be said of other adverts: Stella Artois (Verdi Forza Del Destino Overture), British Airways (Delibes Flower Duet from Lakme), Hovis Bread (New World Symphony!). Music used in this way can be a powerful tool for teachers when introducing children to classical music. Something ‘boring’ is made accessible. It is then for the teachers to add context, showing that there is more to the music than the thing to which it has become attached. Fifty Shades of Grey, however, is a book for adults. And, in my opinion, releasing such a compilation disk not only infantilises adults by assuming that they can’t find these works for themselves, it also cheapens great works of art by association.

What might, however, be easier to defend, would be the use of such marketing ploys in order to make money as a means of pursuing worthier projects elsewhere – here I am, of course, thinking of new music. Naxos has done this with compilation disks of music from adverts. The big record labels are increasingly, however, a lost cause for living composers.

So it is with EMI this month. Whilst there’s nothing else that plums the depths of Fifty Shades, their releases are wearyingly predictable. There’s Bizet’s Carmen, Nielson and Tchaikovsky Violin Concertos, some Vivaldi and Beethoven and several compilation disks: Great Cello Concertos, Rodgers and Hammerstein at the Movies and Maria Callas – The Studio Recordings. The one ray of light, but one that is still decidedly mainstream, is a disk of Brahms and Berg Violin Concertos with Renaud Capucon and the Vienna Philharmonic.

Naxos, on the other hand, completely outclasses the full price big boys. There is a new recording of Chen Gang’s Yellow River Concerto and (written with He Zhanhao) The Butterfly Lovers Concerto with the New Zealand Symphony Orchestra;  a programme of American trumpet music featuring works by Leo Eylar, Steve Rouse, Robert Starer and Stephen Sondheim; Gabriel Jackson’s Requiem and other works with the Vasari Singers under Jeremy Backhouse; and Tan Sun’s Concerto for Orchestra, Symphonic Poem of 3 Notes and Orchestral Theatre with the Hong Kong Philharmonic under the baton of the composer.

Elsewhere things are relatively quiet. There’s a handy new page on NMC featuring all of the 20×12 composers. I’ve already written extensively on this project, but do pay a visit if you haven’t already. I also very much enjoyed browsing NMC’s annual review document, which is a great reminder of the excellent work done by the record label.

I will also mention a disk that I didn’t notice when it first came out, but have since enjoyed a great deal: John McCabe’s Rainforest I and II on the Dutton record label. McCabe is a composer well worth checking out; he seems to manage the uncanny trick of being adventurous, lucid and accessible all at the same time. It also features the violinists Harriet Mackenzie and Philippa Mo, who together make up Retorica, performing his Double Concerto Les Martinets Noirs. I reviewed their brilliant debut disk in September and their playing is no less engaging and assured here. Look out for an interview with them on CT, coming soon.