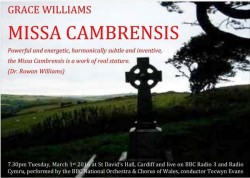 In my teens I spent many a happy hour digging around in the Welsh Music Information Centre, a repository for scores and recordings of mostly recently written music from the principality. It proved a useful introduction to some of the most important names in Welsh music and in one case – the music of William Mathias – inspired a lifelong passion.

On one visit to the WMIC I remember its Director A.J. Heward Rees digging out a recording of the 1971 premiere of Grace Williams’ Missa Cambrensis. The performance was execrable. In fact, as he explained to me, the occasion was something of a cause célèbre in the life of the composer. The work had been greatly anticipated, the composer’s only opera The Parlour having been well-received a few years earlier. Unfortunately the massed choir and Llandaff Cathedral boys’ voices proved incapable of coping with Williams’ vocal writing. To add to these woes, two of the soloists withdrew before the concert.

Grace Williams was distraught after this debacle and never returned to the work. It has, since that day, often been viewed as a forgotten masterpiece, an unjustly neglected work. Down the years I have occasionally thought about it. Even though the recording that I had listened to at the WMIC had been disappointing, in the manner of all great music badly performed the work had a way of communicating through the shortcomings. It was difficult to understand why it had never been given a second chance. That chance, happily, arrived a little over a week ago in a St. David’s Day revival of the work in Cardiff with the BBC National Orchestra and Chorus of Wales conducted by Tecwyn Evans.

The Missa is conventional in form, except in the Credo, which, in manner reminiscent of Benjamin Britten’s War Requiem, interpolates material from other sources, in this case Carol Nadolig by Saunders Lewis and The Beatitudes. The carol is performed by a boys’ choir, which also feature significantly in the Sanctus, The Beatitudes (in Welsh) by a narrator, in this case former Archbishop of Canterbury Dr. Rowan Williams. The lineup was completed by SATB soloists:  Fflur Wyn, Catherine Wyn Rogers, Andrew Rees and Jason Howard.

The performance, in the second half of the concert, started unpromisingly with an announcement that bass Jason Howard was suffering from laryngitis, but had decided to brave the performance. In the end, this added only a frisson of danger; the ghost of 1971 did not return, the soloists all acquitting themselves well, even though tenor Andrew Rees occasionally struggled with some of the more vertiginously tricky passages. The BBCNOW Chorus coped magnificently with the irregular meters, sudden shifts in harmony and awkward intervals (‘the augmented this and and diminished that’ as Chorus Director Adrian Partington memorably said before the performance), the children’s chorus of Ysgol Gerdd Ceredigion provided a clear and confident contrast to the rich adult voices. BBCNOW were as reliable as ever and Rowan Williams added his inimical gravitas to the readings. One might nitpick here and there – for example I would sometimes have liked a bit more clarity in the choral singing; textures became a little muddy at times – but, it is fair to say that this time the Missa was given a performance that would not stand in the way of critical assessment of the work itself. So what of it?

I think, on balance, the expectations were completely justified. The opening phrase of the Kyrie, with its scotch snap rhythms and interjections from trumpet take you unmistakably into the sound world of the composer. It is an evocative beginning – the darkly incantatory mood befitting the text. The Kyrie, imparted three times by the choir and separated by two Christe sections for soloists, builds threateningly without being allowed to reached a climax. The Gloria is conventionally sectionalised. On first hearing my reaction was that the writing was superb, but the ideas were not interesting enough to be really compelling, a view that changed on a second listening. There is a exhilaratingly frenzied Gloria, a lyrical Laudamus Te for soloists, a metrically tricky – and very catchy – Domine Deus, a lamenting Qui Tollis with agonised woodwind lines. The brief Quoniam then provides a bridge to the Cum Sancto Spiritu, which appears to liberate the rhythms of the Domine Deus.

It is in the Credo that Williams provides her coup de théâtre. Former Director of BBCNOW Huw Tregelles Williams described before the performance that to Williams, an agnostic, the Credo was as much to do with mysticism as with the challenge of belief. After a hushed Et Incarnatus Est – a perfectly judged moment of transition – the children’s voices are introduced. The effect is astonishingly moving, even more so for being reserved for this point. The mass text then continues for moment, followed by a  reminiscence of the carol material. This leads to The Beatitudes, read in Welsh with a simple instrumental accompaniment. The effect seems to emanate somewhere from the mystical past, as if we are witnessing some ancient druidic ceremony. As a Welshman abroad it made me profoundly homesick.

The following movements follow a more conventional pattern. The Sanctus arrives in a blaze of glory with the return of the scotch snap rhythms and other material from the opening Kyrie. Chorus, soloists and orchestra are set against the incantatory sounds of the children’s voices. This leads to two radiant Osannas before a reaching an ethereal close. There follows a Benedictus for choir and soloists. It is a simple and dignified movement with beautiful solo lines for woodwind. It leads directly to the more anguished Agnus Dei, the material for which again recalls the opening of the work, and a bleak Dona Nobis.

Rian Evans, in her generally positive review of the performance, did, nevertheless, called the work ‘strangely repetitive.’ I can, to a point, see what she means – my initial criticism of the piece was the extent to which the music from the opening Kyrie reappears throughout. Perhaps we have both missed the point, however. The reuse of this material is not simply repetitive, it is symphonic; it never reappears in exactly the same way. In this sense the work is a tour de force of integration and development. BBCNOW, supported by the efforts of a number of people, took quite a risk resurrecting this work. It was a triumph. One can only hope that there will be a commercial recording very soon.

The first half of this all-Williams concert also consisted of fine performances of her perennially popular Fantasia on Welsh Nursery Tunes and Trumpet Concerto played by Huw Morgan. The former is performed very often in Wales. It might be described as a ‘medley’, though that does an injustice to the cleverness with which she weaves the succession of melodies together. And its infectiously rumbustious outer sections frame, at the presentation of the melody Si hei lwli mabi, a lyrical core. The Concerto, written for Williams’ favourite instrument, is a very fine work indeed, to my mind superior to more oft-heard pieces by the likes of Arutunian and Böhme. Despite the traditional three movement pattern, the opening movement is more lyrical than energetic. As in the Missa Cambrensis it features scotch snap rhythms, as well as fanfare figures on the trumpet and an almost Mediterranean lushness to the orchestration. The central movement is a passacaglia on a 12-note idea, though the language is not serial. Elements from the first movement intrude as the funereal theme builds with powerful inevitability and impressive control. The final movement seems to reinterpret the mournful atmosphere as diabolic dance. It is marvellously exhilarating, catchy but also a little disturbing.

When I was at the WMIC all those years ago I picked up a trumpet and piano version of the Williams Trumpet Concerto. It was written in the composer’s hand, there being no engraved copy. This situation, I am happy to report, will soon be rectified with the release of a new edition by Tŷ Cerdd. The work is difficult, but definitely accessible to talented amateur players. If you are a trumpet player looking for repertoire, look no further.

You can hear this concert on BBC iPlayer for the rest of March, here.