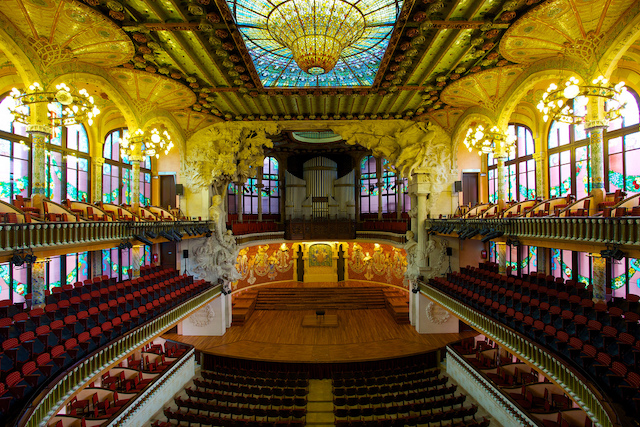 The concerts of the Barcelona Obertura Spring Festival (4th–17th March) take place in three magnificent venues: the Liceu Gran Teatre, one of the biggest opera venues in Europe; the Palau De la Música Catalana, a UNESCO World Heritage Site and L’Auditori, a sleek modern concert hall. Amidst the eclectic programme there are a number of concerts that feature twentieth and twenty-first century repertoire, including works by Riley, Glass, Pärt and Nyman on 6th; Cage’s Sonatas for Prepared Piano on 7th; Daltabaix a la ciutat, a cantata by Josep Ollé and Laura Aubert on 8th; and works by Lucier, McCaffrey, Ravel and Kurtag on 10th.

The Festival Primtemps des Arts de Monte-Carlo (15th March–14th April) features some twentieth century classics, including a performance of Britten’s three Suites for Cello on 28th; Bartók’s Violin Concertos No. 1 and 2 and concerto for Orchestra on 31st; and Stockhausen’s Oktophonie on 6th April. There is also a talk Kagel or the Playing Down of Music on 7th, the screening of his film Ludwig van on 12th and the chance to hear the Siberian Chirgilchin Ensemble perform traditional Mongolian music and songs on 14th.

The Barbican will play host to a Ligeti Total Immersion Day on 2nd March.  There are five events in total: a screening of the 1976 BBC Omnibus Documentary All Clocks are Clouds, a chamber music concert, a talk, choral music, and an evening concert with the BBC Symphony Orchestra featuring Clocks and Clouds, his Violin and Piano Concertos, Atmosphères and San Francisco Polyphony.

For those interested in the next generation of orchestral composers, why not spend the day at Jerwood Hall, LSO St. Luke’s, London, where the six composers from the 2018 Panufnik Composers Scheme will have their pieces rehearsed in an open workshop under the guidance of composer Colin Matthews and conductor François-Xavier Roth.

And, finally, if you are on the hunt for March world premieres here are some highlights: