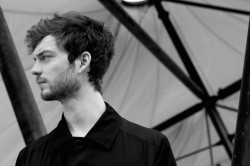 How did you come to found the ddmmyy series?

I wasn’t actually involved in the first ddmmyy show, 090212. That was ran by Tom Rose and Laurie Tompkins – who now direct the Slip imprint together – when I was in my first year at music college in Manchester. They were in second and third year respectively. I came onboard for the second gig, 250512, to conduct and gradually became more involved along with other composers. It’s now just myself and Tom.

Those early days of ddmmyy back in 2012 really set the tone for how the series continues to operate. It’s still a bunch of mates writing music, talking about music together, introducing each other to music, and then somehow amalgamating all of this into a bespoke event. It’s still about presenting new music alongside pieces that we love and feel contextualise each other nicely, except this ‘group of mates’ has vastly expanded since 2012.

I know that sounds quite corny but it’s really how I feel about it all! I’ve never worked with anyone in ddmmyy that I haven’t gotten along with and felt like I’ve struck up a personal relationship with in the process of commissioning or performing their music. A love of people and the music they make. I just hope that can continue really.

What is its artistic mission?

I’m not sure about the phrase ‘artistic mission’ as it sounds a bit grand and somewhat inflexible. However, there are some things that we’ve wanted to keep constant since the beginning.

One of these is making ddmmyy an artist-led space for new work, allowing composers/artists to create work on their own terms and collaborate with myself and Tom to present the final piece in a setting that they see fit. So talking to artists is paramount and all of our projects start off with questions and conversations rather than set proposals.

This has lead to some amazing programmes that I would have never arrived at all by myself, such as 160616 at Cafe OTO in a couple of months which features Michael Finnissy performing his own music alongside piano pieces by Laurence Crane. After approaching Michael with a loose idea for a concert featuring him as a performer, we sat down one afternoon for a couple of hours to discuss ideas and after a few more phone calls and email correspondences ended up with a fascinating evening of solo music, including a world premiere by Michael and a rare performance of a piece I’d never actually heard before.

This is also why ddmmyy is definitely a concert series rather than a fixed ensemble of players, as it allows us to stay flexible and pull together whatever we need for certain concerts/events.

Hopefully by doing this we can contribute something special to the new music scene here in the UK. There are so many brilliant composer-led experimental music nights popping up everywhere in London alongside dedicated young ensembles of an incredibly high standard, and I’d like to think ddmmyy situates itself somewhere in the middle of all of that.

And the concerts have a very particular approach, from the distinct concert titles to the performance of pieces without a break…

At the beginning I think we felt as students that this was the most sincere and interesting way of us presenting our music, and it’s basically just stuck! We take a lot of time thinking about the music we programme and why it fits together, and I think that applause and clunky stage shifts can break the connection between pieces.

It’s a delicate balance though as we want to allow time for the music to breathe, so to speak, and allow the audience time to compartmentalise each individual work before being thrown into another. Although sometimes we purposefully avoid that as well. I’m sure that one day a project will come along where that format doesn’t fit, and then we’ll reconsider how the event will unfold with the artists involved.

The main man behind the look of ddmmyy is Tom Rose, who since day one has designed the posters, logos, website and concert titles, alongside contributing music to the concerts and helping run things behind the scenes. He’s one of the most relentlessly creative people I’ve met and it’s always a pleasure to see his artwork for the series develop. It’s so important to us and really ties everything together.

Tell us a little about the current season.

This current season is our first run of shows in London and our most varied to date. It kicks off next week at The Yard for 210416, an evening of mostly modular music for ensembles, electronics and objects by Jürg Frey, Tim Parkinson, Laurie Tompkins, Jennifer Walshe and myself, alongside the world premiere of reassigned #1 for string trio and auxiliary ensemble by James Saunders, which we can’t wait to perform.

Then we have 290516, ddmmyy’s first venture into presenting sound installations. We’re taking over the club and theatre space in The Yard in Hackney Wick to exhibition two simultaneous installation pieces/long-duration performances: Matthew Sergeant [kiss] for solo violin twine bow performed by Emma Lloyd, and Wisty by Tom Rose – a London and world premiere respectively.

We’re looking forward to settling into our new home at The Yard, who have been fantastic and given us almost total freedom with how we use their beautiful space, which is built entirely out of recycled materials.

Finally there’s the aforementioned 160616 with Michael Finnissy, including the world premiere of Einfältiger Liederkreis given by Michael and the clarinettist Jack McNeil.

And plans for the future?

Well at the moment the future is exciting but vague. Our focus is very much on these three forthcoming shows with potentially some more up in Manchester to round things off, where the series first started.

There’s a huge list of people I’d love to work with – Paul McGuire, Cassandra Miller, Eli Keszler, Joanna Bailie, Mark Fell, to name a few. We’ve got some pretty ambitious commissions/projects in the pipeline, however funding for the new music in the UK is becoming increasingly sparse at the moment which makes things difficult at times.

You are active as a conductor, does that include as part of ddmmyy?

Increasingly less this series, just because we’ve happened to programme music that doesn’t require a conductor.

Conducting makes up a considerable part of my practice and is in no way secondary to composing. Obviously, at times one takes up more hours than the other, but they’re really seen as different sides to the same coin.

I particularly love conducting new music for the same reason I love curating shows, which is to do with being involved in the creation of new work from people whose music I love. Having said that, I also relish opportunities to engage with more traditional repertoire; some of the most enjoyable musical experiences in my life so far have been conducting Beethoven and Wagner at University. An ideal situation would be having the chance to try and combine these two interests.

What about your own music? How did you yourself start composing?

Well I came to ‘composing’, in fact came to classical/contemporary music generally, quite late in my life around the age 16 or so. I stumbled across Steve Reich and György Ligeti through a general teenage search for increasingly experimental music on the fringes of rock, pop and electronic music, which was mostly what I was into and thought I would eventually try my luck at making.

It sounds pretty naive but when I realised that there was this entire ‘contemporary classical music’ scene out there I sort of snapped into action all of a sudden. I taught myself how to read and write music with the help of a particularly strict but great piano teacher and just started writing.

I was lucky enough to get into the National Youth Orchestra as a composer which was a big turning point for me, as it was the first time I met other people my age – and younger – who were dedicated to this sort of culture. That’s where I first met Larry Goves and Anna Meredith who taught on the residencies, had my first pieces played, collaborated with other composers and musicians, and just generally met some good people.

And electroacoustic music was an early influence?

As a composer I wouldn’t say I’m particularly active in this field, partly because I’m not so good with technology, partly because I’ve often found acoustic instruments intriguing enough to make pieces out of. However, I have made electronic music before and recently have started using fixed audio to provide backgrounds to instrumental music, often using processed field recordings which is a practice I find fascinating.

As a listener, electronic music in various guises has dominated my listening habits for years now, whether it be the fringes of dance music, drone or everything in between. As I said, I got into this entire world by just following an inquisitive relationship to sound, and the near infinite possibilities of music made with electronic technology have always provided me with some fascinating and moving sonic experiences.

Fairly impossible question to answer! I can list some names of composers whose music I love, but I’m not sure whether their influence is so tangible or interesting to talk about.

Although he’s a common name that comes up when talking to composers these days, something I’m realising more and more is how much Debussy has influenced my music, particularly with regards to his ideas surrounding how harmony and timbre are one and the same thing. Generally, the vertical harmony I use is fundamentally tied to the quality of the resulting sound itself, through aspects such as density, for example, rather than it being functional. However, I wouldn’t say for a second that my music sounds particularly ‘Debussian’.

Like a lot of composers, the most pertinent influences on my work come from outside of music. Over the last few years or so I’ve been hugely influenced by a rich variety of books, films and poems both technically, such as how structure, pacing and narrative are managed or eluded, and on a more personal level, regarding how and why certain people are drawn to and use certain art objects in their everyday life. I think the imaginative leap required to compare something from another medium to the field within which you work is the healthiest and most revelatory kind of analysis.

Something that’s worth mentioning is that through ddmmyy I’ve interviewed a huge variety of composers and musicians that have been involved in the series, most recently Jürg Frey, Tim Parkinson and James Saunders. Each of these interviews has been a fascinating masterclass in itself and they are always a privilege to do.

I’m currently in the process of finishing off two pieces, one for the London Symphony Orchestra which will be premiered at the Barbican next season, and one for the Aldeburgh Festival as part of the Britten Pears Young Artists Programme, which is being performed in June. They both feel like quite culminatory pieces in a way, as they both wrap up certain ideas I’ve been playing around for a while. They’ve been a real joy to work on.

Then I’m hoping to start a large-scale piece with the visual artist Sarah Hill, continuing a collaboration we began in the summer of 2015 that expands on series of solo pieces I’ve been writing for the wonderful saxophonist Harry Fausing Smith, a great friend of mine from Manchester. Sarah and I essentially create work separately – she makes some visuals and I make some music – which we then swap, analyse and structurally/conceptually recreate in our respective mediums. We’re not exactly sure how or when this will pan out, but the result will be a cycle of pieces which are in some way a duet for saxophone and film, with a series of modular accompaniments featuring other instruments and audio.

Where can people go to learn more about ddmmyy?

And your own work?