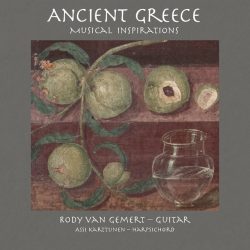 Many years ago I visited the astonishing ruins at Delphi on the Greek Peloponnese. At the end of the visit I went tiredly round the museum, looking at the many interesting if rather worthy exhibits. At the end, having left the building, I suddenly realised that I had missed one of the most important items, the First Delphic Hymn. It is the oldest surviving example of musical notation by a named composer, inscribed on a stone slab found at the site. Of course, I went back to find it. When I did the experience was unexpectedly moving. Genesis.

It comes, therefore, as no surprise to me that musicians might be moved to use ancient works as a basis for a musical project. The album Ancient Greece, Musical Inspirations, featuring guitarist Rody Van Gemert and harpsichordist Assi Karttunen is just such a project.

It is an exceptionally well thought-out programme of music, using not just the First Delphic Hymn but also two versions of the oldest surviving complete musical composition, the Seikilos Epitaph, as a frame. Around this are inserted works by Graham Lynch, Harry Partch, Maurice Ravel and Matthew Whittall. The modern works (which, in this context, includes Ravel) are all inspired in some way by the ancient world. Whether because of the redolence of the Greek theme, the felicitousness of the instrumentation or the exotic quality of the music (often rendered strange by the use of unusual tunings), the result is intoxicating. To listen is to gaze once more at that ancient stone.

Navona Records, a subsidiary of PARMA Recordings, has a very healthy back-catalogue that includes many recordings of contemporary music. They have five upcoming releases, all of which can be previewed on their website or on streaming services: Music in the Listening Place, choral works sung by the Vanderbilt University Chorale; Prisma, contemporary works by Lionel Sainsbury, Clive Muncaster, Patricia Julien, and J. A. Kawarsky; Young Prometheus, featuring works by Mark Volker; Small Stones, Modern Piano Music played by Nancy Zipay Desalvo; and Formika, a collection of chamber by Mexican composer Felipe Pérez Santiago.

NMC are currently running a 20% reduction on their annual subscription, which means if you pay now you’ll get all of their 2018 releases at a bargain price. They also continue two of their recent projects this month with releases of Ray Lee’s sound artwork Ring Out in their New Music Biennial series and a new collection of Next Waves works by young composers Emma Wilde, Peter Wilson, Alex J Hall, Jack Sheen, Joanna Ward and Robin Haigh.

There are three new contemporary music albums on Naxos: a collection of choral works by Norwegian composer Kim André Arnesen; String Quartets 5–7 by Richard Danielpour; and The Core-Set Project, in which Dame Evelyn Glennie’s ensemble offers a programme of fourteen improvised pieces that ‘push the boundaries of spontaneous music-making.’ Hyperion has released the first two of Tippett’s four symphonies, recorded by Martyn Brabbins and the BBC Scottish Symphony Orchestra. Number two, especially, is a marvellous work, a must-listen if you don’t know it. They have also released a disk of three concertos by Aaron Jay Kernis, performed by Royal Northern Sinfonia under Rebecca Miller. Bridge, finally, have released Rube Goldberg Variations, an album of chamber music by Dmitri Tymoczko; and Morton Feldman’s For John Cage, for violin and piano, one of a series of works he write dedicated to other artists.