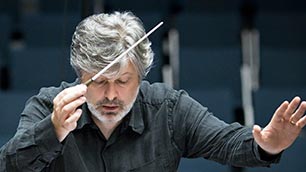 It’s already time to start looking ahead to see what the New Year holds in store for contemporary music. I will do a full preview of 2014 nearer the time, but in the meantime here are some of the best concerts and events to take place in January.

UK highlights include the first performance of Larry Groves’ The Rules by the National Youth Orchestra on January 5th at the Barbican; Juan Maria Solare’s Fénix with the CBSO in Birmingham on 10th; Kevin Volans’ Symphony Daar Kom die Alibama and James Macmillan’s Tuireadh with the Scottish Chamber Orchestra at the Queen’s Hall, Edinburgh on 23rd; and works by Ruth Crawford Seeger, Christopher Trapani, Brian Ferneyhough, Julian Anderson and Horatio Radulescu performed by the Jack Quartet at Wigmore Hall also on 23rd. There are also a number of themed events: a Hear and Now James Macmillan Concert at City Halls, Glasgow on 11th; a five year anniversary concert at Hoddinott Hall, where there is the rare chance to hear several pieces by the venue’s namesake Alun Hoddinott; an ‘Eastern Vigil’ concert on 22nd given by the Estonian Philharmonic Chamber Choir, who will sing works by Arvo Pärt, Cyrillus Kreek, Vasyl Barvinski and Nikolai Kedrov; and a concert of contemporary Danish music at Hoddinott Hall, Cardiff with BBCNOW on 28th. Also of interest is a welcome revival of David Alden’s 2009 production of Britten’s Peter Grimes, which begins its new run on 31st January at the London Coliseum.

There are several workshop-based events that will provide practical advice and inspiration to composers. The first is the LSO Soundhub Showcase on 11th January at Jerwood Hall, London. The event will provide the opportunity to meet five of the composers in the second year of Soundhub membership as they introduce a series of new chamber works written for members of the LSO. In a similar vein, on 21st at Studio 7 at the RNCM, there will be the chance to see behind the scenes as the works of ten contemporary composers – studying at the RNCM, Chetham’s Schools of Music and Salford University – are rehearsed, discussed and developed in a workshop with Camerata musicians overseen by Tansy Davies. On 28th at St. Paul’s Knightsbridge the BBC Singers in collaboration with Choir and Organ magazine will hold a Writing for Choirs workshop. Conductor Matthew Hamilton and composer Gabriel Jackson will give tips and techniques on notation, score-layout, vocal ranges, text-setting and choral techniques, whilst the BBC Singers will contribute their practical experience and expertise.

In the Salle Pleyel, France on 8th January Anne-Sophie Le Rol, Glen Rouxel and Suzana Bartal will play Sonata pour deux violons and Toccata pour piano solo by Eric Tanguy; also at the Salle Pleyel on 19th there will be a world première of a new work by Alberto Colla given by Orchestre National d’Île-de-France; the Boston Modern Orchestra will give premières by Rakowski, Ueno and Ruehr at Jordon Hall on 17th; whilst in the Concertgebouw, Amsterdam on 25th harpist Gwyneth Wentink will play works by Mensingh, Pärt, Snoel, Schlomowitz, Cymatical and Simeon ten Holt. Always interested in politics, an opera production that caught my attention was Sebastian Rivas’s Aliados, which Nixon in China-like examines the interaction of two world leaders, in this case Margaret Thatcher and Augusto Pinochet. Events are during the time that Pinochet was arrested in the UK and Thatcher lent him her unreserved support. The production takes place in the Théâtre de St-Quentin-en-Yvelines in Paris starting on 31st.