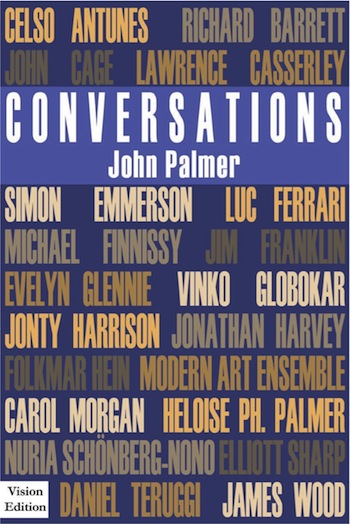 Conversations is John Palmer’s new book published by Composer’s Edition in partnership with Palmer’s own enterprise, Vision Edition. It contains 20 conversations with major figures in contemporary music: 13 composers, 4 players, a conductor, tonmeister and founder of a music archive. It is an impressive list of names, including figures such as John Cage, Jonathan Harvey, Michael Finnissy, James Wood, Luc Ferrari, Richard Barrett, Evelyn Glennie and Nuria Schönberg-Nono.

Palmer is very deliberate in preferring the term ‘conversation’ to ‘interview’ – certainly the tone that comes across throughout is one of an exchange of ideas between friends. That said, the conversations don’t ramble. Most begin with questions about background and musical formation, leading to more specific questions as the conversation develops. Palmer manages this unfolding expertly.

The oft-repeated structure allows readers to gain useful perspectives. It is fascinating, for example, to see the varied routes by which each of the composers came to music. There’s the more traditional choir and organ background of Harvey and Wood and then those with much less conventional early years. Richard Barrett and Daniel Teruggi, for example, became composers relatively late in life, both having being primarily interested in science.

Palmer also does a good line in reusing more imaginative questions, which can be just as revealing of his own interests and motivations. These range from technical information about a composer’s electronic setup, to his frustrations about musicians’ inability to perform aleatoric scores. My favourite concerns Palmer’s belief that music has an intrinsic power to change people; he is convinced ‘that an accurate listening experience may not only stir new perceptions of life, but also trigger a radical change of consciousness…therefore, by multiplication, it can initiate a potential change in the world.’ It’s an interesting idea that provokes fascinating responses.

In the more specific questions it is abundantly apparent that Palmer both knows his stuff and has done his homework. He asks Wood about his coming across Aristoxenes’s treatise Stoicheia Rhythmika in the 1980s and the effect on his music, a vital key, it turns out, to understanding his development. He takes Harvey through all the key moments in his musical formation and understands the importance of Rudolf Steiner and the influence of Eastern religions upon his work. There are, likewise, penetrating questions about Richard Barrett’s socialism, Finnissy’s eclecticism, the influence of Borges on Casserley, the influence of Japanese music on Jim Franklin, mathematics in the music of Elliott Sharp.

Neither is Palmer afraid to ask difficult questions. Conductor Celso Antunes remarks at one point that ‘there are developments [in new music] which I find frankly boring and sometimes completely nonsensical in musical terms.’ With an elegantly polite preamble Palmer asks ‘I would like to know which music directions you perceive as being nonsensical and why? Can you be as specific as possible, please?’ There is a frank and revealing discussion with Evelyn Glennie about the loss of her hearing and some beautifully tongue-I think-in-cheek exchanges with John Cage. With the later, for instance, the questions ‘Do you actually hear the sounds you write while you are composing?’ and ‘You once said you don’t have a feeling for harmony. Is that really true?’ provoke unexpected and hilarious responses.

John Cage is, indeed, one of the ‘superstar’ conversations that will rightly attract people to this book. Others highlights include the wide-ranging and substantial interviews with Jonathan Harvey, Michael Finnissy, Evelyn Glennie and James Wood. I loved the spontaneity and energetic fun of Luc Ferrari’s conversation, despite the trouble he had speaking in English, and Nuria Schönberg-Nono offers a unique perspective on twentieth-century music, having been both the daughter of Schönberg and wife of Luigi Nono. Her role as a founder of a musical archive also has resonance for me here in Basel, with my daily visits to the Sacher Foundation. As well as these grand figures, however, you should read this book for those that you know less well or not at all. The interviews will have you scurrying to your computer to look for more information and musical extracts.

A number of the interviewees are particularly known for their electroacoustic and acousmatic composition. Some may find that limiting, but it is to mistake the purpose of the book: it doesn’t pretend to be a neat cross-section of contemporary composition. Palmer also has considerable experience in this area – a significant minority of his own output being for the medium – and this puts him in a good position to be able to ask the right questions. The result is that many of these conversations powerfully advocate a too often neglected field of contemporary composition.

Some of these conversations have already been published in music journals. If you are a regular subscriber or have access through JSTOR you might want to double-check how much overlap there is. For those without access, or even those who would like to have these fascinating, illuminating and entertaining conversations in one place, the book is an easy recommendation.