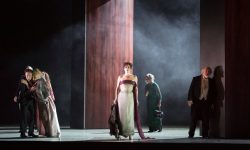 One disappointment in this year’s BBC Proms (15th July–10th September) is that there will be no first night premiere. It has been a great advert for the Proms’ commitment to new music to have a commissioned work at the start. It also sets composers an interesting compositional conundrum: how to self-express whilst writing music that is appropriate for the occasion. It’s resulted in some engaging solutions—Gary Carpenter’s theatrical Dadaville last year was a particular delight.

Despite this, there are plenty of new pieces to enjoy throughout the rest of the Proms season. As last year, I will put together a calendar guide to the works of living composers before things kick-off. In the meantime, the best way to find premieres is to look at the complete list of composers. A rummage through those with birthdates only will turn up quite a few first performances. Alternatively, if you are content just to know the main new works for July, have a look at the concerts on 26th, 27th and 31st, with premieres from Anthony Payne, Michael Berkeley and Lera Auerbach respectively.

Highlights at this year’s Cheltenham Festival (1st–17th) include a showcase of music by Sally Beamish on 16th and, on 11th and 12th, the chance to hear works from next-generation composers who have been at work on the festival’s composing scheme. Premieres include: on 8th, works by Neil Luck, Adam de la Cour and Kate Moore; on 9th new pieces from Arlene Sierra and Kathy Hind; and on 10th there are compositions by Kenneth Hesketh and Ed Hughes written to accompany film shorts.

This year’s Festival Aix-en-Provence (30th June—20th July) opera premiere is Kalîla Wa Dimna by Moneim Adwan (1st–16th). Its libretto, in Arabic and French, is inspired by Kalila and Dimna, an 8th century book of animal tales attributed to Ibn al-Muqaffa. On 12th there is also the first performance of Benjamin de la Fuente’s Piece for two string quartets, drums and recorded voice, presented with a number of newly-commissioned works from young composers.

Thomas Adès’s third opera The Exterminating Angel receives its first performance at the Salzburg Festival on 28th, with subsequent performances running into August. The libretto is based upon Luis Buñuel El ángel exterminador, a surreal film that sees a group of protagonists inexplicably unable to leave a room, a metaphor, perhaps, for the way in which we are all trapped in our own heads. The Salzburg Festival itself continues until the end of August. Of particular interest is Salzburg Contemporary, which forms part of the whole. This will be broken into three parts, the first focusing on Cerha and Kurtag (26th July–16th August); the second on Peter Eötvös (30th July–3rd August); the third on more music by Thomas Adès (two concerts: 2nd and 18th August).