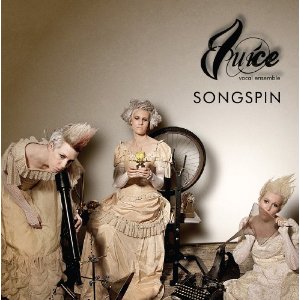 Following their well-received CD of music by Tansy Davies, Troubairitz, in March, Nonclassical (www.nonclassical.co.uk) has just issued Songspin, the debut recording of the vocal trio Juice. Known for their innovative programming and sometimes quirky vocal arrangements, they very much fit into the contemporary-classical-cum-pop approach of the company. I heard Juice live a couple of years ago and, have to admit, felt that their style of concerting wasn’t for me. The intimacy and range of this recording has, however, made me think again. Spanning simple folk songs (though often enlivened by the Juice trademark sighs and heavy breathing!) to post-postmodern DJ-style remixes, it is hard not to get caught up in the eclectic smorgasbord on offer. The performers themselves carry it all with consummate musicianship. Recommended.

Nonesuch (www.nonesuch.com) has just released a new disc of music by John Adams containing première recordings of Son of Chamber Symphony (2007) and String Quartet (2008). The former is played by the International Contemporary Ensemble with the composer conducting, the latter by the St. Lawrence Quartet, for whom the work was written.  The ‘Son of’ aspect of the work refers to his earlier Chamber Symphony, a piece that confronted the ghost of Schoenberg via cartoon music. Whilst the piece clearly owes much to the earlier work the result here is, perhaps, more immediately engaging. For example, whilst the central movements of both pieces share the same formula of long held melody over more active bass, in the later work the melody is much more lyrical, more ‘giving’. The result feels a little less cerebral, as if Schoenberg has been politely shown the door. The recording is crisp and immediate, Adams’ control of the ensemble in this tricky music admirable. Sadly I cannot properly comment upon String Quartet, since, presumably to make people buy the CD, the substantial opening movement has not been released on Spotify, even to subscribers. The second movement is, however, a closely worked tour-de-force, so the CD is still a fairly safe recommendation, especially for Adams fans.

With an opera being premièred this month at ENO the young American composer Nico Muhly is clearly hot property. Decca (www.deccaclassics.com) has just released a third disc of the composer’s music, Seeing is Believing (named after the concerto with which it opens), featuring violinist Thomas Gould with the Aurora Orchestra conducted by Nicholas Collon. If, like me, you are coming to his music for the first time it provides a good introduction to this composer’s sound world. Four original works are interspersed with arrangements by the composer of old English choral music, a period of music that fascinates him. His approach in these arrangements is respectful – he largely sticks with the notes given (or at least implied) by Byrd and Gibbons – and the results are inevitably attractive. The original works are the aforementioned violin concerto, Motion, By all Means and Step Team. The works exhibit a range of influences – the poise and restraint of Tudor polyphony, the expansiveness of Copland, the driving rhythms of Adams –  but they are bound together to form a sound that is recognisably new.

Hyperion (www.hyperion-records.co.uk) has released a new disc of choral music by James Macmillan, performed by Wells Cathedral Choir conducted by Matthew Owens. I haven’t heard the disc, though I have tried the ‘buy before you buy’ tasters on their website. I have to say, however, that they slightly confirm something I have found on other recordings I have from Wells on this label: the choir is excellent but the recording itself lacks immediacy; there’s just a bit too much acoustic. Deutsche Grammophon (www.deutschegrammophon.com) have released a new disc with percussionist Martin Grubinger playing music by Keiko Abe, Matthais Schmitt, Michel Camilo, Xenakis, Rod Lincoln and Josef Burchartz. Naxos (www.naxos.com) have released several discs as part of their  ‘classics by country’ series that feature the music of living composers Xavier Benguerel, Chester Biscardi, Louis Karchin. Also worth checking out is Joanna MacGregor’s superb new recordings of Cage, Nancarrow and others released by Warner Classics (www.warnerclassicsandjazz.com). It’s been a while since I heard the Sonatas and Interludes for Prepared Piano and I find it hard to imagine performances more persuasive than these. And hearing three of Nancarrow’s Player Piano Studies played so brilliantly by a human being is nothing short of jaw-dropping.