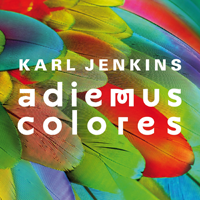 It’s fashionable to knock Karl Jenkins. Some might say that it is even inappropriate for me to blog here about him. The truth is, however, that his music provokes valid questions about the place of contemporary music in our society. He is one of the few living composers who make a living out of writing concert music away from the support structures of arts bodies. For that alone he should demand respect.

In the world of record labels successful music equals commercial music. Measuring the worth of a piece of music is not, however, as simple as this, as we all know. A piece of music may only be readily understood and enjoyed by a few people, but that does not mean it is not good music. But, in my opinion, neither should pleasing a vocal claque by being esoteric be seen as a sign of success either. I’m not going to open up the distinctly tricky subject of ‘high’ versus ‘low’ art here. That’s a subject for university lecture theatres and learned tomes on musical philosophy (try Roger Scruton’s excellent Understanding Music for example). Jenkins himself is rather pleasingly open-minded on the issue of style: ‘”I firmly believe that the future of music lies in a plurality of styles, each composer and each listener true to themselves and to the music that moves them; that expresses our emotions and the world we live in today.” That presupposes a rejection of schools of composition, prescribed and proscribed methods of writing. Whilst such schools have undoubtedly created great art they also have had the unfortunate side effect of side-lining composers who didn’t fit in with their manifestos. Think of Boulez’s rejection of almost anyone who didn’t agree with him. Ultimately we are left with the music, which must be judged in its own right.

I like some of Jenkins’ music. It’s not at all ironic that this most commercial of composers spent much of his early life composing commercials. This gives him an enormous facility for connecting with listeners quickly and directly. I would go so far as to say that if you are unmoved by listening to his extraordinarily catchy Adiemus then probably music is not for you. It gets under your skin. It is music that sets out to provoke an immediate and physical response. It succeeds. In this way it’s not much different from, say, the opening Responsorium from Monteverdi’s Vespers. You won’t find many commentators on high art knock that particular work. The problems, for me, set in when he attempts to write works of greater emotional depth.

The simplicity of the opening of the Monteverdi is, of course, the prelude to a work of extraordinary depth and compositional mastery. When Jenkins tries to tackle something similar, things tend to descend into pastiche and cloying sentimentality. His The Armed Man: A Mass for Peace is a classic example of this. Given his subject matter, his opening treatment of the old tune L’homme armé is embarrassingly anodyne and compositionally not very imaginative. There is a successful pastiche of Palestrina in the Kyrie, but it feels stylistically wrong alongside everything else, not least the inexplicable Muslim call to prayer that precedes it (David Fanshawe was much better at incorporating this sort of thing). It goes on like this. Not strictly part of the work, the album of the Mass ends with a setting of Laurence Binyon’s For the Fallen, a frighteningly saccharine work full of snippets of the Last Post and a voice over of the second stanza of the poem.

Given all this I was quite glad this month to see Jenkins return to his Adiemus project with the disc Adiemus Colores. As Jenkins himself has described it, it is kind of Adiemus meets Latin America. Jenkins’ fascination with the area comes through Afro-Cuban jazz, the music of Antônio Carlos Jobin and Àstor Piazzolla and his involvement with jazz-fusion band Nucleus. As a Welshman he is also drawn to this part of the world by the historical curiosity of there being a Welsh-speaking settlement in Patagonia, Argentina. Each section of the thirteen-movement work is named after a colour, the music abstractly reflecting that colour. The music itself is full of Latin American pastiche: curling and moody trumpet solos, smoochy strings, throaty vocals and, of course, Latin rhythms. This is no bad thing; the style helps to draw the whole thing together. Jenkins also injects it with plenty of toe-tapping energy. There’s nothing that quite approaches the goose bump-inducing original Adiemus track, but what we’re left with is perfectly attractive well-made music. It doesn’t challenge but it certainly entertains.

Jenkins makes much of being true to oneself as a composer. Compared to the mishmash that was The Armed Man he achieves this here. He should, perhaps, remember this next time he embarks on one of his more profound utterances.