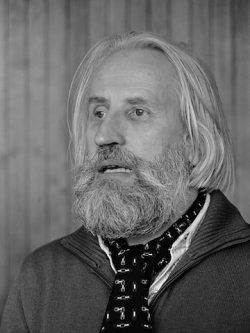 Swiss composer Klaus Huber died in Perugia, Italy on October 2nd. He was 92.

Born in 1924, Huber attended the Zürich Conservatory, studying the violin with Stefi Geyer and composition with Willy Burkhard. He worked as a teacher, including at the Basel Music Academy (1964–73) and the Freiburg Musikhochschule (1973–90). Many of his students—including Toshio Hosokawa, Brian Ferneyhough, Kaija Saariaho and Wolfgang Rihm—have become significant figures in their own right.

Huber was of the same generation as Pierre Boulez and Karlheinz Stockhausen, with whom he was often compared. Whilst he closely followed the developments of the Darmstadt school, his adoption of serialism was, however, less dogmatic—his breakthrough work, chamber cantata Des Engels Anredung an die Seele (1957, performed 1959), for example, adopts a rigorous form of serial structuring that nevertheless permits the emphasising of consonant intervals.

These diverse influences led Brian Ferneyhough to describe Hubert as a a composer that ‘avoided being pinned down to a marketable set of stylistic fingerprints, each work being both a highly individual response to a clearly focused and technically well-honed set of issues and precise reconsideration of the relationship of contemporary music languages to the real imperfect world in which they are embedded.’

Huber was awarded many prizes during his lifetime, including the Beethovenpreis of the city of Bonn (for Tenebrae) in 1970, the Art Prize of the city of Basel in 1978, the European Church Music Prize by the city of Schwäbisch Gmünd in 2007, the Music Prize Salzburg in 2009 and the Ernst von Siemens-Musikpreis in 2009.

The manuscripts of his works are held at the Paul Sacher Stiftung, Basel.

Klaus Huber at Work (also discussing the use of third tones)