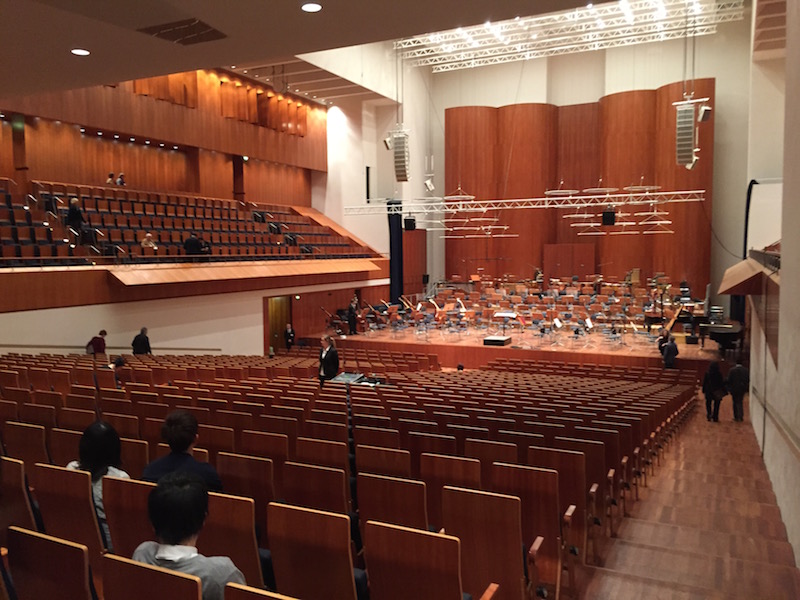 Another couple of interesting concerts here in Basel. I say in Basel, but the first was actually in Germany. One of the curiosities of this city is that its suburbs are in three countries: Switzerland, Germany and France. It goes a long way to explaining why everyone seems fluent in at least three languages.

I headed a bit further into neighbouring territory on 13th, however: to the Konzerthaus Freiburg (see first photo), where the Sinfonieorchester Baden-Baden und Freiburg were playing Lachenmann’s Tableau, Beethoven’s Piano Concerto Nr. 3 and Berio’s Sinfonia.

I was there mostly for the Berio, which I’ve never heard in concert. It was every bit as brilliant as I’d hoped, especially the crazy parody in the third movement of Mahler’s Symphony No. 2. Lachenmann – an immensely tall and impressive figure – was present for the performance of his Tableau. The work, I confess, left me nonplussed. Despite, to borrow a phrase from my more enthusiastic companion, the work being like a beautiful garden of sound, I had difficulty connecting these sounds into a comprehensible whole.

On 16th I headed to Bahnhof für Neue Musik, a little bit, perhaps, like Basel’s version of Nonclassical in London. It has a similar relaxed approach to concert going and makes use of a pretty interesting venue: the Gare du Nord Station near the border with Germany. There is a rather grand, if slightly faded, bar. You are then free to take your drink into the concert area, which used to be the station’s first class waiting room (second photo).

The concert programme consisted of Ensemble Phoenix Basel playing two works by young composers that had been awarded prizes by the group: Vladimir Guicheff Bogacz’s bulle apenas and Matthias Renaud’s Concerto for Piano and Ensemble. Both were written in response to John Cage’s Sixteen Dances, which formed the second half. Of the two, Vladimir Guicheff Bogacz’s was easily the most successful, partly because of the relative reserve with which it deployed the four available percussion players. It was a trap that Matthias Renaud’s Concerto did not, sadly, avoid; the work becoming a chaotic barrage of percussion sounds and extended techniques. It was a relief when the Cage came, which was an object lesson in deploying generous resources, using few notes, to maximum effect.

One curiosity here has been the difference in pricing and audience attendance at the concerts I’ve been to. The large hall at Freiburg, Germany was completely sold out for a concert that consisted of mostly newish music. It cost €11. The Gare du Nord concert was 30 CHF (almost the same in euros); the Feldmann, Ligeti, Stahnke concert earlier in the month was 50CHF (which nearly provoked a wallet attack). These are prices that make me, a person that is enthusiastic about new music, think twice. They seem to have the same effect on others: neither Swiss concert was well attended.