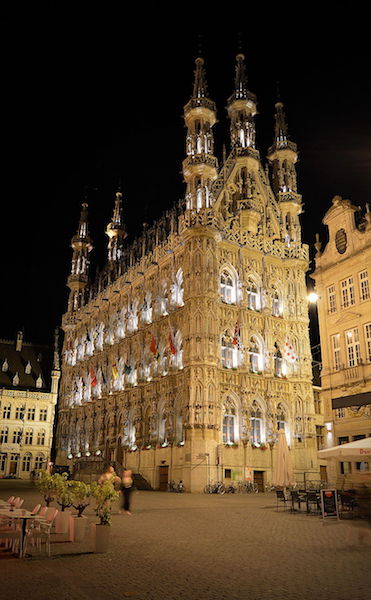 It is with some exhaustion that I have just updated the concert listings here on C:T. Another period of change sees me now living in Leuven, Belgium, having wended my weary way here from sunny Nice a couple of weeks ago. Hunting an apartment has been enervating, rendered more stressful by the desire to become established before Mrs. May begins the business of Brexit.

I hope, soon, to be able to bring some more interesting perspectives from this part of the world. I am, indeed, excited by the possibilities. Nice is a beautiful place, but it is artistically out on a limb. Here I am one train stop from Brussels, with other important cultural centres within easy reach, including London, Paris, Amsterdam and Cologne.

One thing I can report is that linguistically Belgium is fascinating. Here in Leuven the main language is Dutch, or Flemish to be exact. Yet one can quite happily get by in daily life speaking English which, whilst not being an official language, is much preferred to French. And yet if you take that one-stop train journey to Brussels the world turns Francophone. The eastern cantons of Eupen-Malmedy, on the other hand, are Germanic. Different regional languages are, of course, pretty common in Europe—indeed I grew up with this in Wales—but the degree of linguistic homogeneity within each region makes one feel that Belgium is several countries in one, a fact, I suppose, reflected in the country’s federal system of government.

Anyway, I digress. March is still a bit early in the season to be a bumper month for new music, but if you cast your eyes around there is, as ever, plenty going on. On 3rd Oliver Knussen will conduct BCMG and Huw Watkins in the world premiere of Helen Grime’s new Piano Concerto at Wigmore Hall, with a second opportunity to hear the work at the CBSO Centre on 5th. In New York on 3rd, meanwhile, Gene Pritsker’s new Violin Concerto with Big Band will be premiered by Vesselin Gellev at The Cutting Room, 19th West 24th Street.

James MacMillan receives a brace of premieres at the Queen’s Hall, Edinburgh in March. The first, on 4th, is his Concertino for Horn and Strings, to be played by Alec Frank-Gemmill accompanied by the Scottish Chamber Orchestra. On the 23rd is the Scottish Premiere of his Stabat Mater, performed by The Sixteen.

At the Concergebouw, Amsterdam on 11th is the first performance of a new Requiem by Willem Jeths. If one premiere is not enough in a concert, however, there are two concerts worth checking out. On 19th, the New London Children’s Choir celebrates its 25th anniversary with a programme that includes eight world premieres. Similarly, in Paris on 30th Ensemble Intercontemporain marks its fortieth anniversary with concert that includes seven new works, each of which is based on one of the days of Genesis.

At Wigmore Hall on 25th, finally, is a day dedicated to the music of Thomas Adès. It begins with a concert at 1pm that contains his The Four Quarters, Concert Paraphrase on Powder Her Face and Piano Quartet, as well as music by Lutosławski and Walton. At 6pm is the chance to hear Adès in conversation with Wigmore Hall Director John Gilhooly. The day concludes with BCMG performing his Concerto Conciso and Arcadiana Op. 12 alongside works by Kurtág, Janáček and Gerald Barry.