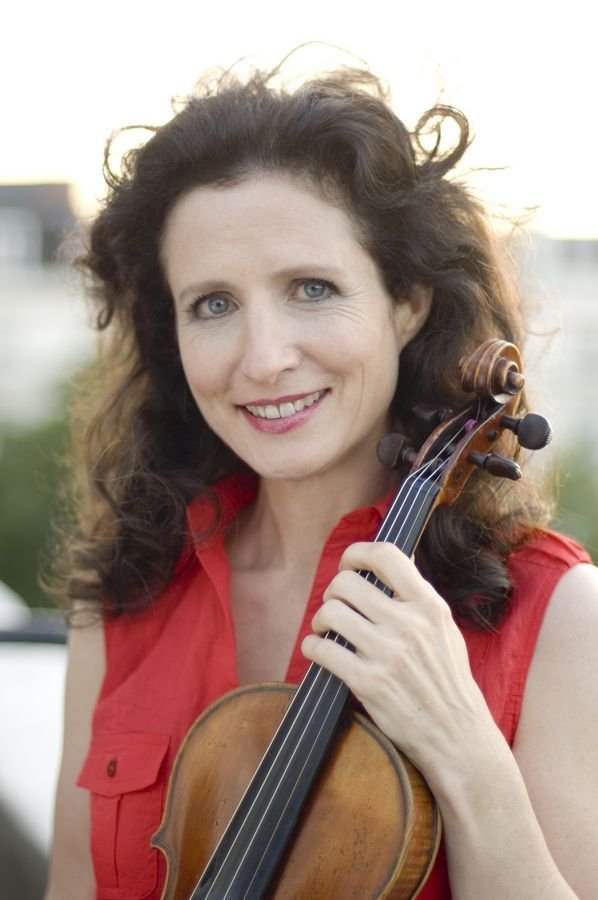 Christian Morris talks to Madeleine Mitchell, who will be giving the world premiere of a newly discovered work by Grace Williams on 7th September and whose new album, Violin Muse, will be be released on the Divine Art record label in October.

Tell us about your new album, Violin Muse.

This is a collection of seven world premiere recordings of violin works by established living UK composers. Five of the pieces were written for me (three as gifts), which I’ve premiered between 2007–15, and I’ve worked with all the composers on the album. It’s good to have a concerto—Guto Puw’s Soft Stillness (based on lines from Shakespeare’s The Merchant of Venice)—and violin duos—Judith Weir’s collection Atlantic Drift (celebrating the flow of traditional music between the British Isles and North America)—as well as five pieces with piano—by Michael Nyman, David Matthews, Michael Berkeley, Sadie Harrison and Geoffrey Poole. It creates an interesting mix of textures. There’s a lyrical thread linking many of the works, which I think suits the violin. I’m pleased to be joined by the BBC National Orchestra of Wales under Edwin Outwater, pianist Nigel Clayton and violinist Cerys Jones; and that it’s my second album for Divine Art.

I’ve been fascinated by the violin as a muse for composers, painters and writers and it’s interesting that significant composers for the violin didn’t play the instrument but collaborated with and were inspired by violinists. I’ve been privileged to have had around 30 works written for me over some years.

Your association with living composers goes back to the beginning of your career. Apart from those represented on this new disk, are there any highlights from these working relationships, not just in terms of the finished piece but also in the collaborative process?

I started out as the violinist/violist in Peter Maxwell Davies’ seminal group The Fires of London, whilst beginning a solo career in more standard repertoire and some teaching. It was through Max that I met several composers who then wrote works for me. The first I commissioned was *Brian Elias’s Fantasia for a London recital prize I’d been awarded by the Kirkman Concert Society, where I wanted to include a new piece along with Brahms and Bartok. Piers Hellawell then wrote me a violin concerto, Elegy in the Time of Freedom (1992); James MacMillan two pieces—*Kiss on Wood and *A Different World; and Robert Saxton, whose sextet I played with the Fires, wants to write me a violin sonata next year.

Some of the composers have readily accepted slight modifications I’ve suggested—say something practical to realise their intentions (such as *Anthony Powers’ In Sunlight) and I slightly changed a few things in Guto’s concerto to make it more playable. On the other hand, Nigel Osborne wrote me an extraordinary piece for solo violin, *Taw-Raw (2004), which is very difficult, but because he’s one of the few composers who’ve written me pieces who plays the violin, I was able say ‘show me’ (the extended techniques).

The last, short piece on my new album is by Michael Nyman, called Taking it as Read, which he wrote as a gift for the opening of my Red Violin festival at the Wales Millennium Centre. It sounds like a Welsh hymn. I’ve known Michael for over twenty years. He invited me to tour with his band and previously wrote me three pieces, *On the Fiddle, which I’ve played a great deal.

Grace Williams’ music has been deservedly receiving more attention recently, especially with the revival of her Missa Cambensis in 2016. And now we have a newly discovered Violin Sonata. Tell us a little about this work and the circumstances of its discovery.

I discovered the manuscript of Grace Williams’ Violin Sonata at Ty Cerdd, Wales’s Music Information Centre, about 18 months ago when I was researching violin music by Welsh composers. Written in 1930 with the first movement revised in 1938, it was unpublished and, surprisingly, hadn’t been performed. This was perhaps because the composer had written on the cover ‘slow movement worth performing, 1st and 3rd not good enough.’ I think she was too self-critical and that it’s a strong work, passionate and gutsy. The first conference on ‘Women’s Work in Music’ in Bangor coincides with the 40th anniversary of Grace Williams’ death. It seemed an ideal time to bring this work to the public. My programme on 7th September also includes Weir’s Atlantic Drift duos and Sadie Harrison’s Aurea Luce from my new album plus two exquisite nocturnes by Lili Boulanger (1911) and Rebecca Clarke (1906, for 2 violins and piano).

You are busy on the international stage, but am I correct in detecting a special affinity for Wales? I am thinking of your collaboration with Guto Puw and BBCNOW, this new premiere and other work in the country, such as your artistic direction of the Red Violin Festival in Cardiff.

I’ve played in over 50 countries now and enjoy many different places but yes, I’m half Welsh, feel at home there and have done a great deal of performing throughout Wales and also for radio and television. I’m thrilled that BBC NOW agreed for me to have the live recording of our performance of Guto Puw’s violin concerto—performed at Hoddinott Hall, Cardiff as part of the Vale of Glamorgan Festival (originally premiered at the Bangor Music Festival) – on my new album.

Talk to performers to really find out about what instruments can best do, how they work. Bartok experimented with a violin even though he didn’t play, to work out fingerings and so on. He also wrote each of his violin works for a particular violinist and toured with Szigeti. Collaborations can be exciting and beneficial.

And in the context of contemporary music, to a young soloist?

Keep abreast of what’s happening now and in new music, go to concerts, listen to Radio 3, work with your composer contemporaries! See if they’ll write you a piece, collaborate or share in the creative process if they’re willing—it can be fulfilling. Ask them how it should go, where does it come from? I think that work with living composers, where you can ask them things, infuses and refreshes one’s approach to those composers no longer with us.

What excites you about a piece of music – what keeps you interested?

When you play a ‘war horse’ there are so many existing versions in recordings, whereas with a brand new piece, it’s the first time the written music comes to life. It’s a responsibility, a privilege and something fresh and creative. Sometimes you have to work for weeks with a new score but then there’s the satisfaction from the composer.

And what turns you off ?

When it’s really ungrateful to play e.g. not making the most of the inherent qualities of the instrument; difficult for the sake of it; or before ‘Sibelius’ etc, when the music was unreadable or impossible to turn, so you have to spend hours re-organising it.

Do you read unsolicited scores?

Yes, when I can make time.

In November I’ll be touring the USA (including Weir’s Atlantic Drift from Violin Muse) and giving a recital on 4th November at the Canterbury Festival as part of the Stanford weekend. Sir Charles Villiers Stanford was an important influence on British composers and I’ll be playing works by him and three of his pupils – Howells, Bridge and Goossens together with David Matthews’ Romanza from my new album.

Where can people find out more about you?