March Pick of the Premières 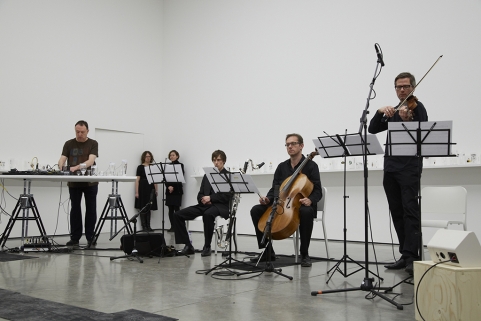 If you’ve not already been, Christian Marclay’s solo exhibition continues throughout March at the White Cube Bermondsey. It features his new video installation Pub Crawl in which he ‘coaxes sound from the empty glasses, bottles and cans that he finds abandoned on the streets of East London during early morning walks. In a series of projections that run the length of the gallery’s corridor, these discarded vessels are hit, rolled and crushed, forming a lively sound track that echoes throughout the space.’ The exhibition also features shorts concerts on 1st, 8th, 15th, 22nd and 29th in which the London Sinfonietta will play new commissions that respond to the space.

At Wigmore Hall on 4th the Britten Sinfonia première a new work by Dutch composer Joey Roukens whilst Magnus Lindberg’s new piece will played by Leila Josefowicz (violin) and John Novacek (piano) on 19th. Both works are, as yet, untitled. Pitch up to learn more.

On 8th at the Barbican there is the chance to see the UK première production of Unsuk Chin’s Alice in Wonderland with a multimedia staging by Netia Jones, which will combine ‘the darkly imaginative illustrations of gonzo-artist Ralph Steadman with live action, interactive animated projections, eye-popping costumes and choreography.’

An Englishman in New York, Thomas Adès makes his NYPhil conducting debut on 12th, conducting the US première of his own Totentanz alongside works by Beethoven and Berlioz. On 7th the NYPhil present one of their Contact! concerts, this time exploring music from Nordic countries, including premières from Per Nørgård, Kaija Saariaho and Ðuro Živković.

Also in New York there are two residencies at The Stone, a space dedicated to experimental and avant-garde music. The first, beginning on 17th, features composer/accordionist Guy Klucevek and will feature three world and seven New York premières. The second, beginning on 26th, features composer Lukas Ligeti with a number of guest artists including Marilyn Crispell (piano), Susie Ibarra (percussion) and Eyal Maoz (guitar).

In France, finally,  Dai Fujikura’s new opera Solaris receives its première on 5th March at Théâtre des Champs Élysées, with a subsequent performance on 7th. It is based upon the same 1961 Stanislaw Lem novel that inspired the famous film adaptation by Andreï Tarkovsky. Ensemble Intercontemporain are conducted by Erik Nielsen.