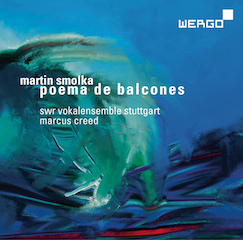 The music of Czech composer Martin Smolka was unfamiliar to me until I came across this new disk of his choral works on Wergo. The programme contains his Poema De Balcones; Walden, The Distiller of Celestial Dews and Słone i smutne. The works are written for large choral forces, the clustered textures occasionally recalling the avant-garde techniques of the 60s. What sets these pieces – the first two in particular – apart, however, is that, though clearly aware of their antecedents, they wear this knowledge lightly.

Poema De Balcones takes a few elliptical lines by Frederico Garcia Lorca (el mar baila por la playa/ un poema de balcones/ retumba el agua), reimagining them in sound. Though the text becomes lost, the composer treating it very freely, its essence is translated into a brilliantly persuasive sound picture. There is naivety in its pictorial directness, though this is also part of its charm–clustered crescendoing chords seem to depict the languid sea, the whistling of the choir the birds overhead. The style is harmonically rich, though at all times chords are chosen to preserve a sense of consonance. The gradual pace of change suggests a work designed to be wallowed in, but there is also a clear sense of direction: the overlapping crescendoing chords become more instant before leading to a central stasis finally followed by both a continuation and development of the opening ideas. The effect is magical.

Each of the five movements of Walden, the Distiller of Celestial Dews sets an excerpt from Thoreau’s Walden; or Life in the Woods, a book that describes living simply in natural surroundings. Like the first work on the disk, the texts are treated quite freely, Smolka picking small sections of text to concentrate upon. Only in the anguished (and often detuned) homophony of the third movement Indians, is it set almost as it appears on the page. As in Poema De Balcones much of the writing is pictorial, most strikingly in the second movement Lake, where the the serene surface (‘smooth as glass’ sung repeatedly) is disturbed by little scraps of other material, almost as if a pebble were being thrown in the water. The harmony retains the kind of clustered consonance present in Poema (albeit a little stretched in the aforementioned third movement), though Smolka isn’t above a nice simple melody, such as the repeating unison ideas that begin the first and last movement. There is also a delicious hypnotic phrase in the fourth movement on the words ‘cinquefoil, blackberries’, which is alternated with a syncopated passage that suggests a fondness for jazz.

It’s not exactly more of the same in the last work on the disk, an eighteen-minute setting of Polish poet Tadeusz Różewicz’s Słone i smutne. The texts, once again, are treated very freely, and many of the stylistic fingerprints of the other works are here. They are, however, dialled up a little. The structure is improvisatory and, as such, harder to discern; the clustered harmony tends to emphasise the dissonant, melodic lines are more angular. That the composer took a more instinctive approach is revealed in his observation: ‘If you analyse it then you can find short melodic fragments, cluster-like sounds and many repetitions of short passages. I knew this was just what I had to write, I don’t know why.’ The result is certainly more challenging, but the quality and variety of the ideas keeps the listener engaged.

In his Manifesto of a Re-tuned Composer Smolka remarked ‘Please, no more musical revolutions. […] Please, no more new music, but rather strange music.’ If I had to sum up Smolka’s style without being technical, I’d say he makes the strange accessible and the accessible strange. In my opinion this is the hardest compositional line of all to walk; to be challenging is not so difficult, playing to the gallery not so hard either. In this beguiling disk Smolka pulls off the rare trick of managing to do both.

Poema de Balcones is available on Spotify and Apple Music.