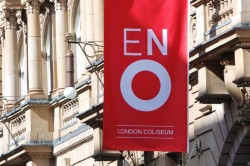 Conductor Martyn Brabbins has just been appointed Music Director at ENO, the latest attempt to stabilise the troubled opera company (for more thoughts on this from me, see here).

An inspirational force in British music, Martyn Brabbins has had a busy opera career since his early days at the Kirov and more recently at La Scala, the BayerischeStaatsoper, Lyon, Amsterdam, Frankfurt and Antwerp. He is a popular figure at the BBC Proms and with many of the leading British orchestras, and regularly conducts top international orchestras, returning to the Royal Concertgebouw, Tokyo Metropolitan and Deutsche Sinfonieorchester Berlin this season.

Known for his advocacy of British composers, he has conducted hundreds of world premieres across the globe. He has recorded over 120 CDs to date, including prize-winning discs of operas by Korngold, Birtwistle and Harvey. He was Associate Principal Conductor of the BBC Scottish Symphony Orchestra 1994-2005, Principal Guest Conductor of the Royal Flemish Philharmonic 2009-2015, Chief Conductor of the Nagoya Philharmonic 2012-2016, and Artistic Director of the Cheltenham International Festival of Music 2005-2007. He has this season taken up a new position as Visiting Professor at the Royal College of Music.

The appointment runs until August 2020, and Brabbins will plan the 18/19 and 19/20 seasons together with ENO’s Artistic Director, Daniel Kramer. We are delighted that he will already be able to conduct one opera production (title to be announced) in 2017/8.