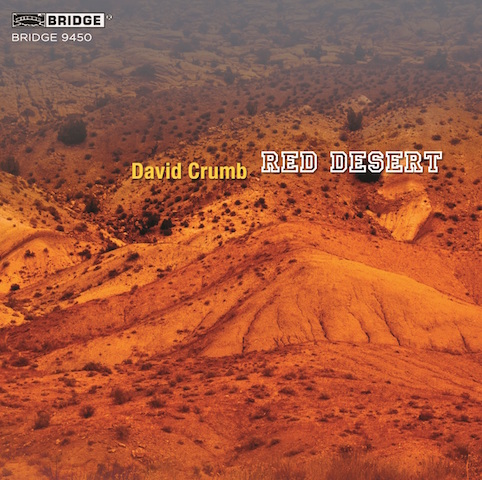 Time to dismantle the hustings, take off rosettes and breathe a sigh of relief that the UK election, possibly the most tedious campaign I can remember, is finally done with. At least the end was exciting, though I hate to think of what it harbingers for the future of the UK. It’s good today to be back looking at musical things: a pretty good range of new CD releases.

On Bridge Records Paul Lansky’s Contemplating Weather is a choral cantata commissioned to celebrate the 100th anniversary of Western Michigan University School of Music. As the title suggests, it sets poems that examine various facets of climate. The style is attractive, though a little anodyne for my taste. Don’t let that stop you making up your own mind, however. On the same label, David Crumb’s new disk contains four chamber works, the most substantial of which, the three movement Red Desert for Baritone and Piano also lends its title to that of the album. There is plenty of meat on offer here, from the witty dialogue of Soundings to the vast contemplative spaces of Rock Cathedrals (first movement of Red Desert). It is well-written music, not afraid to embrace a wide harmonic range. Worth exploring.

Such advice also applies to two new disks on Signum, which, like the aforementioned, can also be Spotified. I’m going to write a little more about Judith Weir’s new choral disk Storm in a separate blog post, safe to say that I am enjoying it a great deal. Also just released is Tamsin Waley-Cohen’s programme of music for solo violin, which consists of works by Bartok, George Benjamin, Penderecki, Carter and Kurtág. I’ve only dipped into this. It’s serious and astringent fare, but rewarding for the same reasons.

On Naxos a new Penderecki album consists of two choral works, his Magnificat and the much later (and therefore less avant garde) Kadisz performed by the Warsaw Boys’ Choir, Philharmonic Choir and Orchestra under Antoni Wit. There is a disk of orchestral works by Zhou Long, including his Symphony Humen 1839; Joan Tower’s Violin Concerto, Chamber Dance and Stroke; Pinho Vargas’s opera Os Dias Levantados, an exploration of the coup of 1974 that ended Portugal’s fascist regime; the latest issue of Naxos’s series of orchestral music by Gian Francesco Malipiero, most substantially containing his Sinfonia degli eroi (Symphony of Heroes); and, more lightheartedly, a reissue of the definitive restoration of Korngold’s music for the 1938 Warner Bros.’ production of The Adventures of Robin Hood.

A couple of other Spotifiable options to finish. Dutton Epoch have just put together a 3 for the price of 2 deal on a collection of works by Arthur Butterworth, a Manchester-born composer who died in 2014. Symphony No. 1 and 4, and the Viola Concerto, plus an interesting monologue from the composer talking about his life and music are available for streaming. The music itself, as the composer says, takes an individualist route, not attempting originality but rather using familiar, especially tonal, elements to forge his style. On Decca meanwhile, there is a new two-disk collection of piano works by Philip Glass played by Valentina Lisitsa. It includes the famous opening to Glassworks, arrangements from the soundtrack to The Hours and Metamorphosis 1-5.