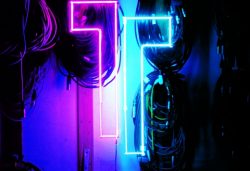 The Techtonics Festival (5–6th) at City Halls, Glasgow prides itself on being being international, this year being no exception, with performers and composers from Japan, Lithuania, France, Sweden, Norway USA and UK. Premieres include a piece for Japanese koto by American composer and sound artist Miya Masaoka; and new works for the BBCSSO by Dror Feiler, Naomi Pinnock, James Clarke, Evan Johnson, and Marc Sabat. There’s also a focus on the French composer Pascale Criton.

The Vale of Glamorgan Festival (9–16th May) takes place in various venues in South East Wales. There is a focus on the music of Welsh composers, especially works by the festival director John Metcalf, as well as by Chinese composer Qigang Chen and Danish composers Per Nørgård and Bent Sørensen. There will be new works by Helen Woods and David Roche as well as Metcalf’s Six Palindromes in the final concert on 16th.

The Prague Spring Festival (12th–3rd June) offers around 50 concerts in its month-long programme. One of the themes of the festival will be a commemoration of the hundredth anniversary of the founding of Czechoslovakia, with performances of music by Bohuslav Martinů, Josef Suk, Klement Slavický, Pavel Bořkovec, Miloslav Kabeláč, and Eugen Suchoň, as well as representatives of the younger generation including Michal Nejtek, Ondřej Adámek, Lukáš Sommer, and Marko Ivanović. There are also a number of world premieres including Michal Nejtek’s Ultramarine, played by the Warsaw Philharmonic, a new work from Luboš Mrkvička played by Klangforum Wien, the song-cycle Little Works by Marko Ivanović, EQ172 by Alexey Aslamas and Sundial by Jan Kučera. There will also be a special new work, Passacaglia 1918 by Michal Müller to celebrate the hundredth anniversary of the founding of Czechoslovakia.

Oxfordshire’s Festival of English Music (25th–28th May) provides, as the name suggests,  a cross-section of music by purely English composers, with a particular focus on polyphonic works of the sixteenth century and music of the twentieth and twenty-first centuries. The later will include two premieres: the first UK performance of Richard Blackford’s Violin Concerto and the world premiere of Christopher Wright’s Symphony.

Other May world premieres picks: